Alpha Ship
Mitch is so unnecessarily hostile toward Logan in this episode, I love it. I almost feel sorry for the latter, who has clearly moved past this rivalry, while Mitch is stuck in 2016 and keeps patting himself on the back for winning despite Logan being like, "I'm not even playing."

Other things Mitch are in this episode: doggedly steadfast in his Jamie loyalty and -- because I meant doggedly as a pun -- willing to roll over like a puppy for anything she asks. (the "sweetheart I am begging you to stop being an idiot who's going to get herself locked up" face! the “you need a real lawyer” resolve that melts in two seconds flat after hearing "I need someone I can trust"!)

The 18 different "WTF NO" faces he makes upon hearing Jamie's definition of lawyer are pretty good too. And I do enjoy when Mitch digs in his heels to help Jamie by running around solving problems and handling situations if he can't do anything by just being with her.
But this week's episode highlight is the hand touch, which works immediate magic on whipping my ship radar into a frenzy.

I don't particularly like the reveal of Jamie manipulating both of them equally, but I am at least willing to listen to what she has to say for herself in the next installment. Shape up quick though, Campbell. The redemption gained from being a non-murderer expires surprisingly fast.

"Nope. Not without Jamie." Awww, his old favorite refrain.

"I'm not going to let you punish Jamie for breaking your little heart." The thing I specifically love about this line is how completely off base Mitch is for the amount of swagger in his chest, yet I care not one little bit because because the whole protective guard dog thing? Kinda workin' for me.

"You're going to slap a special consultant badge right here on my chest and you're going to take me in there with you, or your captain's going to hear about how you stormed Reiden Tower and then disposed of key evidence via mail drone." 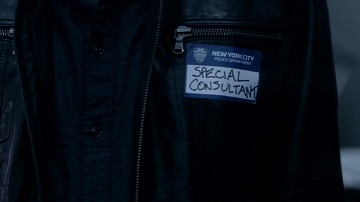 And best of all: "This is not over." Yes please on that particular Stern Tone.

Family Matters
First, I'm very sorry for going to the dark side, but the Trio of Lesbian Mercenaries are now my favorite minor characters of the year. I wish I had an idea and the writing talent to write up their backstories. I want to know how they got into this life and how they teamed up. I can't decide if the main one is someone who's always been into shady dealings, or if something happened along the way to strip her of her compassion and decide that saving your own skin is all that matters now, because she's learned that everything can be commodified. Everything. (guess which one I want)

But honestly, this is an extremely excellent use of Clem's screen time. I hate to be that person, but I am that person, always: if you ever introduce a post-apocalyptic/dystopian/war-like setting, one of my first questions is always, "What would happen if someone here were pregnant," followed by "What if it was both difficult and imperative to keep them safe." So. I am tickled pink they pulled that off despite starting the year saying such a trope would be impossible.

I really like Mitch's trying-not-to-be-overbearing-while-definitely-this-side-of-worried phone message to Clem, and I like his "JAMIE WHO" sprint out of the building when he gets Dariela's call even better. (though it'd be kind of nice if Jamie were able to be part of the rescue squad. I'd even let Logan come along for that benefit.)

P.S. I'm sorry where did they get a paparazzi shot of Mitch and Clem at the park?! Not that I don't love footage of one of my favorite scenes ever, but they definitely went there by themselves. Did one of them have a stalker? Did Mitch decide to set a timer on a camera phone and take an artistically framed stock photo instead of a normal smiling one to remember that day? Was a random photographer strolling around the city looking for images of urban family life, think they were just perfect, and later realize that was the late great Mitch Morgan and he should send a copy to his daughter? I'm just trying to help you out with the plot holes you could fly that plane through, here.

You know what that's it, I am 100% done with the Never Ending Tragedy of Jackson Oz show and I'm 'bout to leap into a Lost-style Sideways World where he and his wife/son are just fine, his dad died early in obscurity, his mom his happy and well, and just to make sure nobody attached to him gets left out, Tessa and Chloe are, IDK, a nice lesbian couple who have 7 kids via sperm donor whose father turns out to be Jackson. And also Abigail is everything to him that I wanted Jamie to be before I got obsessive in wanting them to kiss. And that besides Isaac, he's basically honorary uncle to Clementine. Plus any children Mitch and Jamie might have, as long as I'm making up wish fulfillment scenarios.

There. Just push me into that world whenever I get too hysterical, at least until/unless human sterility is fixed and he and Tessa can have that family she wants so bad. In related news, I have accepted that I am never gonna actively ship them, but I like her face enough to want nice things for her.

Plot Might Matter Too IDK
* Yeah, if I were Abe, I think I'd be ready to divorce my wife at this point too. I would also want to divorce my husband if he was that cold in response to me pouring my heart out over the worst choice of my life that I made alone to spare him from it. What I'm saying is, this divorce has "best idea ever" written all over it. Sorry, Isaac.

* I am actually kinda glad I spoiled myself about Mr. Duncan's identity, because it is way more fun to know something regarding what they're Mysteriously Mysteriousing about.

* I love the angry fat cats. (see also, this post)

* And also the Loyal Puppers d'Abigail, since they are not ripping Mitch to shreds. They seem like Good Boys.

* But Abendegos.. DID THAT THING JUST SAY JACKSON OZ WTF. That's terrifying. Take it away. I don't like apes on the best of days, much less when they have giant tusks and homicidal rage issues.

* Mansdale taking advantage of a prison break only to be immediately dropped into a volcano is...a pretty hysterical “FML,” and also feels like this season's Sloth Scream moment in terms of peak awesome ridiculousness. Also, I need to preserve my favorite line from the Vulture recap I read while trying to remember his name: "I’d like to apologize. For a brief moment of darkness last week, I called Zoo boring. Forgive me. I’ll never do it again. Because Zoo responded by throwing a man into a volcano."

Actually, I want to preserve a big ol' chunk of that recap, so here is a longer chunk in spoiler text for when that link dies:
[they are going nuts over this plot point. as they should.]

I know a big part of Zoo’s draw is the unbelievable stuff that happens on it every week, but still, I cannot believe what happened in this episode’s first five minutes. I don’t know how they do it, man. Tommy Wiseau himself could show up in a damn episode of this thing and be like, “OH HAI JACKSON,” and it’d be totally cool.

It gets even better. Immediately after they unwittingly toss Mansdale into a volcano, they get a call from Mitch, who was just told by Jamie (as the police took her into custody) that they need Mansdale because he has information that will exonerate Jamie. Whoops!

Oh, and the best part of this whole “we accidentally dropped a man into a volcano” thing? Everyone who finds out takes it completely in stride. Abe, who learns what happened to Mansdale by reviewing security footage after realizing Mansdale went missing, pretty much just goes, “…my bad.” Mitch, when Abe and Jackson tell him they misplaced a man in a freaking volcano, is all like, “Hmm, yeah, that sounds about right.” And later, when the news finally makes it to Jamie, she’s like, “Oh, nice! I was wondering when we’d get around to dropping dudes in volcanos.”

Even that isn’t the actual best part about all this. Nothing beats the fact that the episode title is a pun about what they did. They dropped Mansdale like he was hot.