That's right, it's a Hawaii Five-0 post! There are really only four possible reasons for such an appearance: a wildly cool case, a hurt and/or comfort feature, an extra-shippy special, or Grace. To lower your suspense, I'll tell you right off it's the first two, across two different episodes this season.

Background/catchup: the last time I saw this show was the season 6 premiere in 2015, which makes my last words at the time extra funny:

I feel like...I almost want to keep watching this season, since it's airing on empty Friday nights, to see how he wriggles out of that whole owned-by-the-Yakuza-and-now-totally-broke deal. And what happens with Catherine. All the things. i-have-no-idea-what's-going-on-but-I'm-excited.gif

But I did not miss the kerfluffle this summer about Daniel Dae Kim and Grace Park being let go because CBS failed to pony up the appropriate dough, and this is one case where I definitely sympathized with the actors. I don't care how much they push (or fandom embraces) the buddy-cop duo, that was a solid 4-part lead ensemble which should have been compensated accordingly. Or this may be my anti-Scott Caan bias coming out. Fortunately, I am not invested enough to be devastated, but I was curious as to what I would find when I was drawn in by the promos for the Halloween episode...

8x05
"Five-0 investigates a string of murders on Halloween that mirror stories from well-known Hawaiian folklore" is the relevant official part of the summary, and if you think I could resist that premise combined with the eerie music of this promo featuring the jungle at night, that terrifyingly mutilated face and CLAIRE FORLANI, you are sorely mistaken.

[EDIT: "In Hu a'e ke ahi lanakila a Kamaile, she and Steve are kidnapped by serial killer/therapist Dr. Madison Gray. She stabs them in the back, then puts them in a water cave to die" SHUT UP I'M THERE. And she has a daughter they also rescue at some point?! How did I miss hearing about any of this!]

On the Newbies: Listen, I stopped being sad about the departed cast members about six seconds after meeting our fantastic new leading lady. Very little is better to me than a seasoned guy serving as mentor to a newly minted young grad. Usually for shipping reasons, if the grad is female and as sharp and pretty as this one. But not today! (mostly because I am busy shipping her, in a very casual and restrained and friendship-based way, with the new guy) Today I am just super happy to watch the veteran team members guide the new ones along. Which means I need to force their names into my head; her name is Tani Rey and his is...well, apparently he's going by Junior Reign, officially, even though I'm p. sure that was going to be my name for the two of them collectively. I really like him too, with his super affable nature and resplendent charm.

On the Plot: that was absolutely everything I came for in terms of spookiness, thank you. (with the legends. not the murderer on death row. Him I tuned out). Mostly because I had such fun watching Tani strut her legend-knowledge stuff. That was definitely the way to get her into my heart.

Was I ever going to officially mention this episode on the blog? Probably not, since it happened 5+ weeks ago and I never watched the show again. Except that last night I was worn out from work, I needed a metanl break, and I finally remembered what time this show is on just as it was starting. I meant for it to be mostly background noise, but then BIOWEAPON EXPOSURE HAPPENED, so.

8x09
Listen, I was just minding my own business, soaking in the joy of the new kids on the block, and all of a sudden they've been exposed to some kind of deadly virus with no known cure that kills you like ebola within 12 hours. Admittedly I was still only half paying attention to the proceedings -- oh hey, is that Kono's husband? Neat, guess he didn't die of the GSW he was suffering from when I saw him last -- but all of a sudden Danny started stumbling around looking like death warmed over, and oh, okay. You're really gonna push this team to the brink of dying? I could be here for that.

And that's the nutshell version of how I actually cared about Danny for the first time in my entire life.

The only-slightly-longer version is that I was very fond of his & Steve's every "we're about to die, bro" / "yeah. sucks" interaction. Mostly the ones where he was pretty much beyond responding. FINE, THIS MOMENT. 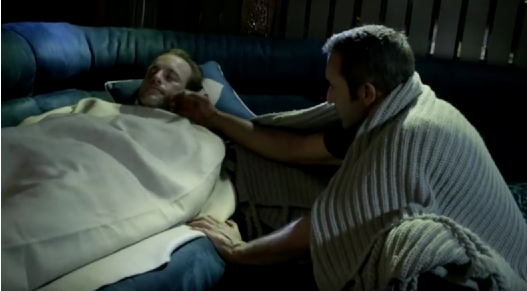 And then the promo for next promised me the still-quarantined gang being held at gunpoint and Danny being shot, so I guess I'm showing up AGAIN, and also probably need to take myself on a hurt/comfort YouTube tour. There must be about 50 options by now, right? Doesn't Steve alone almost die like every month?

P.S. I don't know how long Chi McBride has been part of the show or if I've ever specifically mentioned him before, but if not, please rest assured he is as unflinchingly wonderful as Jorge Garcia is annoying.
P.P.S. I take it things with Catherine did not work out after all, and Steve is once again unattached to a lady friend? It is so wild only checking on this show once every year or two and adding only the most cursory of Wikipedia background checks when doing so.