Original Top Ten Tuesday post [here]; this post is queued and will be linked when I get a chance. I am glad that TTT is still as backward-looking-into-2018 as I am. That said, prepare yourselves for some repeat titles from other recent TTT's in this post... 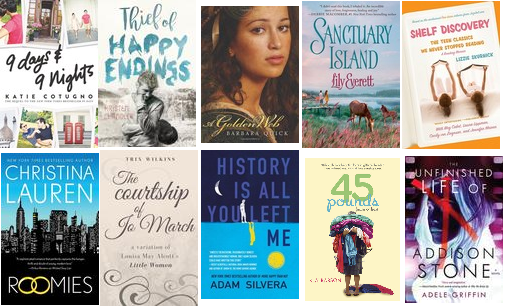 9 Days and 9 Nights - Katie Cotugno
This made a TBR list before; you can review my reasons there. I specifically wanted to read this in early to mid-summer, like I did with the first book, but the library didn't get it until June and that window was here and gone before I knew it.

The Thief of Happy Endings - Kristen Chandler
If my local independent bookstore had carried this, I would have bought it as a summer treat. But they did not, and I was not bold enough to ask them to order it, and unfortunately neither local county library ordered it either. This is another one I really wanted to read specifically in summer.

Golden Web - Barbara Quick
This was my post-The Borgias reading pick, in a vague attempt to cast something even remotely resembling Lucrezia/Djem for an AU in a YA setting, but I thought it would be more efficient to pick it up in person than request it, and I just...failed, over and over, to actually go to that library because it's out of my way. By the time I did, my brief surge in interest in this era of history was gone.

Sanctuary Island - Lily Everett
Hot protective men taking care of women and horses everywhere, in a 6-book romance series. It sounds like the dream! Unfortunately, by the time I was able to call the first book in from the library and had finished off all the more pressing deadlines on my list, I was finally off my Shondaland-doctor-themed crushes and on to Scorpion, where my jam became geniuses who do not mesh with the outdoor world, and I have yet to fall back into the "rugged manly men" phase of my regular Cycle of Favored Archetypes.

[edit: haha I love that between writing this draft 2-3 weeks ago and posting it, I have fallen back into old Survivor seasons and am now, in fact, very much back to being all about that rugged outdoors type. If I didn't have 20 other books already clamoring at me, it would be time to go back to this.]

Shelf Discovery: The Teen Classics We Never Stopped Reading - Lizzie Skurnick
I loved the idea of this book, but every time I started, I'd get overwhelmed by how much I wanted to read all the books referenced within it first. That's a whole year's worth of reading right there.

Roomies -- Christina Lauren
Character descriptions be damned, my plan here was to cast Elyes Gabel and Kat McPhee, either their faces alone or perhaps as slightly younger impressions of their Scorpion characters in New York, but by the time I had time to read it that fandom obsession was waning. Never want to spoil a book with potential by reading it at the wrong time, so back it went.

The Courtship of Jo March -- Trix Wilkins
I wanted to read this alternate ending SO BAD, but it hinges upon my rereading Little Women (another book I meant to get to) first. It's no good to gulp a heartbreak antidote if you don't have anything in acute need of soothing.

History is All You Left Me - Adam Silvera
I planned to read this as a Klaine AU, as I mentioned in September, but I got them back out of my heart and sealed up the protective layers not long afterward, and had no desire to go back to pain once I'd recovered.

45 Pounds (More Or Less) - K.A. Barson
I checked it out twice last year, but every time I'd start I'd be like, "This would be more fun to read if I were on a healthy eating/exercise plan too [like the character]," and I just never had the motivation to start one.

The Unfinished Life of Addison Stone -- Adele Griffin
One of the several titles on my shortlist of "cool formatting / visual interest" books, I was very excited about this one...but it turned out my local library did not have it in circulation. They DID have it on the sale cart, so I promptly bought it and in doing so, torpedoed all urgency to actually read it now that I can just stroke its cover and anticipate it all I like instead, without fear of return deadlines.
Tags: top ten tuesday
Subscribe