This week's TTT (home base/party post hosted here at That Artsy Reader Girl) is not gonna be nearly as exciting as last week's, but it's fun for me so I'm linking up anyway.

Funny story: 2 days before Thanksgiving, I was down to 1 singular checked-out library book, and TOTALLY SET to hunker down with books I own for the winter...but then someone on Reddit informed me about libraryextension.com -- a browser extension that allows one to instantly see, when visiting a book page on Goodreads or Amazon, its availability in whichever library system(s) you use* -- and I immediately went hog flippin' wild collecting the newest additions to my virtual TBR. Even after making a decent dent in it, I still have heaps left to read (conveniently, exactly ten). Let's break it down, shall we?

*it's failed on 2 occasions so far to identify books that are actually in one of my systems, so double-check as needed

Ladies and gentlemen, we got thrillers! 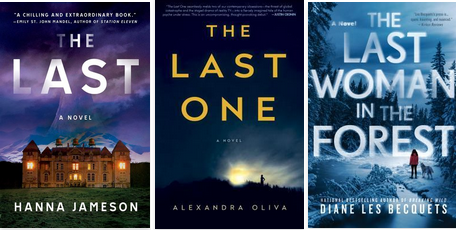 (got me a theme here, apparently)
1. The Last - Hanna Jameson (2019)
This breathtaking dystopian psychological thriller follows an American academic stranded at a Swiss hotel as the world descends into nuclear war—along with twenty other survivors—who becomes obsessed with identifying a murderer in their midst after the body of a young girl is discovered in one of the hotel’s water tanks.

You had me at "dystopian psychological thriller," tbh.

2. The Last One - Alexandra Oliva (2016)
Seems I've found a new pair of book twins... This one and the above were found in near-immediate succession, and while I KNOW it is a bad idea to read two similar books back to back, they both look so good that I can't bear to leave one for a later date. I will say that this one caught my eye because it reminded me of my beloved 2013 show Siberia:

It begins with a reality TV show. Twelve contestants are sent into the woods to face challenges that will test the limits of their endurance. While they are out there, something terrible happens–but how widespread is the destruction, and has it occurred naturally or is it man-made? Cut off from society, the contestants know nothing of it. When one of them stumbles across the devastation, she can imagine only that it is part of the game. Alone and disoriented, she is heavy with doubt regarding the life she left behind, but she refuses to quit. Staggering countless miles across unfamiliar territory, she must summon all her survival skills–and learn new ones as she goes.

3. The Last Woman in the Forest - Diane Les Becquets (2019)
This one was highlighted in a TTT post at Booker T's. I never would have heard of it otherwise, but: working rescue dogs, conservation worker, forest in the winter, former relationship with a “mentor” whom she has just learned MIGHT ACTUALLY HAVE BEEN A SERIAL KILLER, with the suspense plot being proving or disproving that to be true? So many good elements!!
-------
Contemporary fiction and/or romance!

(randomly all summer-set...I guess it's nice to imagine the opposite of snow)
------
4. One True Theory of Love - Laura Fitzgerald (2009)
Since the love of her life betrayed her [. . .] Meg and her nine-year-old son Henry are taking on the world in their own lively way, and it’s enough. Then Meg unexpectedly finds love in the form of a handsome Iranian-American who befriends her and Henry over a game of chess in a coffee shop.

Apologies for the hatchet job on the summary, but it is WILD to me that this is, like, the exact same insta-family dynamic as Walter/Paige + Ralph on Scorpion, something I have dreamed of reading as a novel for over a year. Except everyone in the book has better names and doesn't have to spend 3 years on UST first.

5. The Distance Home - Orly Konig (2017)
Sixteen years ago, a tragic accident cost Emma Metz her two best friends, one human and one equine. Now, following her father s death, Emma has reluctantly returned to the Maryland hometown she left under a cloud of guilt.Sorting through her father's affairs, Emma uncovers a history of lies tying her broken family to the one place she thought she could never return: her girlhood sanctuary, Jumping Frog Farm.

I know absolutely nothing about this except that I was weaving through the library stacks to get a different book and saw this one on the way – an adult novel featuring horses/a horse farm? MINE.

6. Goldengrove - Francine Prose (2008)
Focusing on a young girl facing the consequences of sudden loss after the death of her sister, this masterful coming-of-age work is radiant with the possibility of summer and charged by the restless sexual tension of teenage life

There's a 50% chance this is the worst kind of literary fiction and I DNF, but also a chance it delivers on two of my favorite tropes: "two people who loved a third in equal measure bond over shared grief" and "two people who morally shouldn't be together, but are drawn to each other regardless and struggle with appropriate boundary maintenance." In this case, it's "what if the younger sister is in the summer before high school, so a bit too young -- but also the late older sister's boyfriend is only 18 so it's not totally squicky or unthinkable for them to hang out?" That appears to be the complicated tangle of feelings that this book explores. Disclaimer that if this bond gets more physical than kissing, though, I am out. That tension best remain taut and unresolved.

7. Ellie & the Harpmaker - Hazel Prior (2019)
Now for a 180 in style -- this appears to be a slow-burn romance between an underappreciated woman with a jerk husband and a very sweet man with autism. I’m not totally sure who I want to cast in it yet so it might not be the right time to read it, but I'm definitely going to read it at SOME point. The Exmoor setting alone...
-------
Nonfiction! 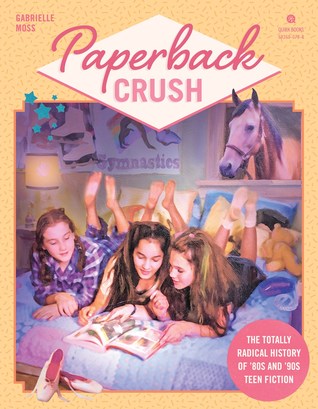 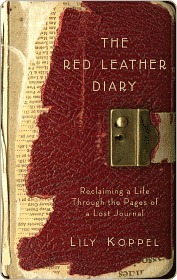 8. Paperback Crush - Gabrielle Moss (2018)
I love me some books about books, especially if the latter are the kind of books that I read growing up and that few people talk about – in this case, all those delicious adolescent paperbacks of the 70s-90s.

9. The Red Leather Diary: Reclaiming Life Through The Pages Of A Lost Journal - Lily Koppel (2008)
Is there anything cooler than finding an old 5-year diary? I recently found one myself at an estate sale (more on that later, when I can take photos), but mine is way less exciting. I look forward to hearing more about this story, where the author found the diary’s original owner and, via a series of interviews, transformed a journalism piece into a full fledged book. Upper-class adolescent life in 1930s New York just fascinates me.
----
And A Youth! 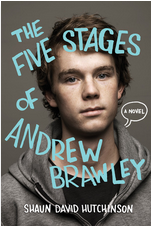 10. The Five Stages of Andrew Brawley - Shaun David Hutchinson (2015)
Convinced he should have died in the accident that killed his parents and sister, sixteen-year-old Drew lives in a hospital, hiding from employees and his past, until Rusty, set on fire for being gay, turns his life around.

The Good Omens miniseries briefly turned my "find me the m/m YA novels" switch back on, and I leapt at all the hurt/comfort potential in this.
-------------
Comment Policy: Most comments are screened and will be unscreened at my earliest opportunity.
Tags: top ten tuesday
Subscribe