(NOTE: this is a queued post and will be linked back to the main one when I get a chance.)

I'm sooo nervous to do this week's Top Ten Tuesday prompt. What if I accidentally over-hype a book to myself?? My brain won't even recognize more than about three 5-star books in a row before I start comparing them and deciding that one wasn't really as good as the others. Plus I sort of assume that most books on my TBR are actually gonna be 3 or 4 stars (which still mean I enjoyed the book), because 5 stars means it was a total knockout, and usually those take me by surprise. Buuut...let's try it out.

Belatedly, I feel like this would have been much less stressful if I'd changed the topic to "books I predicted would be 5-star reads and were," or maybe "books I didn't expect to be 5-star reads that were," but I'm in too deep now to throw out this work. Onward we forge! 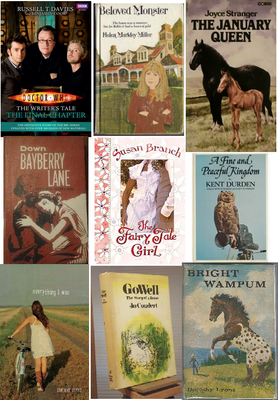 (at the very least, I'll be shocked if these aren't all at least 4 stars)
1. The Writer's Tale: The Final Chapter - Russell T. Davies
I simply predict that the content of this will be too valuable to be anything else. (and NOW I will cease mentioning this book until I've actually read it)

2. Beloved Monster - Helen Markley Miller
Vintage book about an 18-year-old girl inheriting a huge old house. These are all of my favorite things at once.

3. The January Queen - Joyce Stranger
Kate is a spoiled and selfish twenty year old. She is supposed to be helping on her father's farm but through her carelessness, causes a terrible and expensive accident. Her parents take drastic action to force her to grow up. They give her a tumbledown cottage on the farm and a few animals and tell her she has to fend for herself. At first Kate is devastated, but then she helps save the life of a beautiful Shire horse mare called The January Queen. Old Joe, the ex-farmer and breeder who thought he would lose the mare when forced to retire at the age of eighty, is overjoyed. A warm friendship develops between the pair and Joe helps her make something of the smallholding.

The few of Joyce Stranger's previous novels I've been able to read have all been great, and something about this one just extra calls out to me. I just feel like I really want to vicariously experience this girl's life.

4. The Fairy Tale Girl - Susan Branch
This is SORT of cheating because I already checked it out of a library once, and I was so captivated and enchanted just looking at the art design and skimming a few bits that I wasn't able to sit down and make myself read it within the 3-week limit (it was an interlibrary loan, so no renewals and sort of a pain / waste of time to request again when I could request a different book instead). But still, I can't imagine this artistic writer's illustrated memoir (part 1 of 3) will be anything less than incredible.

5. A Fine and Peaceful Kingdom - Kent Durden
It's short, but it's an older ('70s) memoir about the wild animals that the author (a wildlife photographer & filmmaker) encountered, worked with and/or kept as pets. How could it NOT be great?

P.S. I am now kicking myself for deciding I could live without Flight to Freedom by the same author, and donating it without reading it. Sure, I don't love birds the way I love mammals, but I didn't realize that it was about a famous eagle, who appeared in Disney films and everything...

6. Down Bayberry Lane - Helen Girvan
This fills me with the exact same sense of irresistible 1950s teen novel goodness that The Ghost of Kimball Hill did. I'm basing this on the cover and 1 excerpt I read on eBay (click title to view) with no knowledge of what the story is like overall, and yet.

7. Everything I Was - Corinne Demas
"My walls were stripped, and all that was left in the room was a pile of boxes and my mattress propped against the wall." So begins Irene's journey from an Upper West Side penthouse to the family farmhouse upstate with her grandfather.

Between the beautiful cover -- the kind of photo I look at and wish was attached to a story, and this one is! -- and the first few pages, I just feel a strong pull toward the writing style of this book about a young teen whose wealthy parents suddenly lose most of their money.

8. GoWell: The Story of a House - Jo Coudert
Another 70s memoir, this one about an author who has a bunch of pets and renovates/rebuilds an old house in the country, an estate I already saw tantalizing glimpses of in Seven Cats and the Art of Living. This is the kind of story I just love.

9. Bright Wampum - Dorothy Lyons
The Big Sur region along the California coast was still untamed country when Meredith Moore and her family arrived one stormy night. Merry had always ridden and trained horses and when - next morning - she discovered to her joyous excitement a band of Appaloosa horses running wild in the mountain meadows, she determined to gentle one of them.

The odds I'm gonna love a Dorothy Lyons book are already very high, and this summary only cements my certainty.

Aaaand I think I'm gonna stop there. I cannot commit to more!!

Note: anonymous users and OpenID users who include links/URLs, your comments are screened and will be unscreened at my earliest opportunity.