As previously mentioned, I found a draft on my computer of 3 midseason Community S6 episodes, so I have reproduced it below. I have added a few "editor's notes" from the modern day but it is otherwise unchanged. Side note, I can't believe this show ended so (relatively) long ago. Almost half a decade ago!!

June 27, 2015
A couple of months back, Chris and I were having a typical "let's watch an episode of Community and pretend it's enjoyable" date, when all of a sudden the show got amazing 2 weeks in a row. (And then it slumped back down again, but hey, that's two more amazing episodes than I figured I would get this year.)

6x06, Basic Email Security
This one was not great, but I did love the hell out of the 6-way accusatory screamfest in the gym, with too many great lines to quote, as well as the the rest of the school melting down when their emails are hacked. Also this quote from earlier:

Britta: We're talking about freedom of speech. It's the amendment so important it's LITERALLY the first one they remembered to add.
Elroy: For white people.
Frankie: And men.
Jeff: We prefer to be called "people without color or vaginas."

P.S. Jeff hurling a folding chair halfway across the gym was kinda hot. [editor's note: this will be a recurring theme.]

BRITTA'S BEST BOYFRIEND IS BACK AND HIS NAME IS NO LONGER SUBWAY (I'll let you decide if I've been compensated for typing that). That right there was the moment the entirety of season 6 turned around. His face might be some type of guerilla marketing to brainwash me into assuming the show got good, but it worked.  I loved this episode so much I watched it twice and it is still my favorite of the season to date, due to the following and more:

.@or3n Here are just SOME of the titles the writing staff and art dept pitched for band names. pic.twitter.com/SAHV0R8KFU 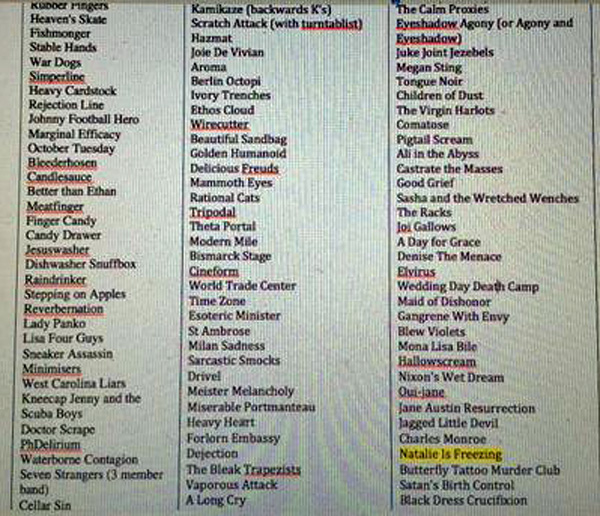 From the episode title alone, I thought this might be something special...and oh, that cobbled-together film was just MAGNIFICENT. I watched the whole thing with giant stars in my eyes as the show finally embraced its Level 7 AU Surreality roots, at least as much as is possible this season. Not least because I did not know I could love Garrett, Voice of Glip-Glop, so much. Also, Chang's commercial was superb, as was the media blitz surroudning it, so I'm pretty sure I'll be quoting "haaaam, gurl!" for the foreseeable future. Also loved Abed's very proud "bazinga!" moment, in true homage to the original.

Best of all, there was that extra hot moment where Jeff tried to strangle Abed among the frisbees ("I'm! Going! To! Kill! You!" / "You're killing me!" / "I TOLD YOU --"). At this point I don't know if I just think fighting is sexy or I'm turned on by a subconscious desire to actually have Abed killed, which is a feeling I thought I had moved on from by the end of season 2, but now I'm just not sure. [editor's note: desire to wipe out Abed has since disappeared, but she is now fond of Jeff's mild panic and jumping back upon realizing he is, in fact, killing his friend]

I did really appreciate Jeff's super-sad existential crisis period of realizing every single one of them is going to leave and he's going to be the last one standing at Greendale, though (even Pierce got to die!). And Abed of all people talking him through it. And Jeff and his super sweet spontaneous thank-you hug!

P.S. God I love Super Enthusiastic Movie Marketing Guy. Can he be a recurring character? Can he be enthusiastic about all kinds of other business ventures as needed?