Ten (Childhood) Books I Enjoyed but Rarely Talk About

Technically this week's topic at That Artsy Reader Girl is "titles that would make great band names," but I am bad at that game. I would have switched it to "titles that would make great horse names," which I'm much better at, but I already found all my favorite titles in this post, so for the first time ever, I am going rogue and delivering a Part II to last week's set instead. This time around I am focusing on childhood favorites, because I don't think I have ever mentioned most of them even in passing on this blog.

Contrary to what this list suggests, my parents did actually buy me new books as well, and plenty of them. I just feel like it's really in keeping with my brand to spotlight books that are (mostly) older than I am. Perhaps in the future I'll do a Top 10 list of 90s Kids Books or Top 10 Scholastic Book Order Selections or something. But for now... 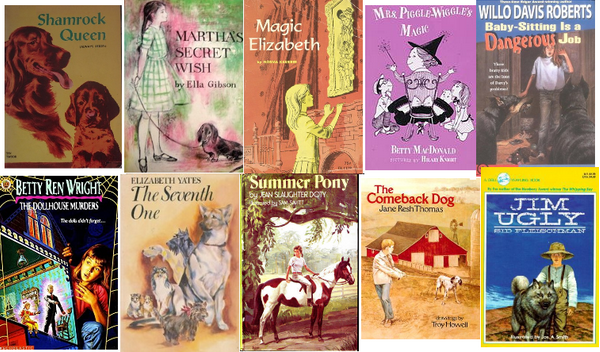 1. Shamrock Queen: Always Reddy by Marguerite Henry (1947)
Obtained this slender Scholastic paperback from my mom's collection as a child. It's one of my absolute favorite Henry books, a skillfully illustrated story of a heroic Irish Setter (the titular Shamrock Queen, known as Reddy) who is rudely evicted from her home to live at City Hall
when her owner's mother moves in with him, and almost gets evicted from there too, until she proves her invaluable worth.

2. Martha's Secret Wish by Ella Gibson (1962)
Ten-year-old Martha has always longed for a father, but when she befriends the new girl next door and rescues a stray dog from a group of cruel boys, her life seems to be looking up. Two worries remain on her mind, however: their rented cottage might soon be given to their landlady's son, and Rollo's real owner might still return to claim him.

Another one from mom's Scholastic collection that I reread many times. It's just such a sweet, innocent story. Also Rollo the Dog is adorable.

3. Magic Elizabeth by Norma Kassirer (1966)
Sally goes to stay with an old Aunt in an old house. Sally is lonely and scared of her Aunt but realises her Aunt is lonely too. They become friends and Sally discovers a girl in a painting who looks just like herself. The girl is also called Sally and is holding a beautiful doll. Who is the other Sally? Where is the doll now?

Same background as the above, and one I simply must reread soon because it's been so long that I seem to have forgotten the details!

4. Mrs. Piggle-Wiggle's Magic by Betty MacDonald (1949)
One last one from mom's collection -- for a long time, the only one in the series I'd ever read, and for that reason, none of the other Mrs. Piggle-Wiggle books can hold a candle to it, not even the one on the farm. If her bad-behavior remedies aren't magic, what even is the point. *cough* Anyway, every chapter of this book imprinted on me in childhood, including my lasting penchant for the idea of an after-school snack consisting of hot cocoa, 2 cookies, and an apple. Not to mention the hunt for pirate treasure in the old house in the last chapter!

5. Baby-Sitting is a Dangerous Job by Willo Davis Roberts (1985)
An incredibly satisfying Kids Save Themselves From Semi-Inept Bad Guys adventure, with so many details I could never forget, from the cupola to the Guard Dobermans who are happy to shrug off their duties and menacing growls in exchange for snackies.

6. The Dollhouse Murders by Betty Ren Wright (1983)
One of the great queens of the juvenile ghost story, she has written many classics devoured by me, but none stand out so vividly in mind as this one. Be honest: there anything more simultaneously exciting and terrifying than discovering your aunt's old dollhouse, which is a perfect replica inside and out of the house she lived in (which you are currently staying in), and then discovering that your great-grandparents were murdered in this very house, AND THEN finding the dollhouse opened and the dolls posed in reenactments of the crime scene every time you enter the attic??

7. The Seventh One - Elizabeth Yates (1978)
I wish more people knew about this book. I've never quite been able to reconcile the fact that it's marketed toward younger readers considering it's about a man reflecting on each dog owned in his lifetime and only the first of the seven chapters is about him as a youth, but that clearly didn't stop it from impressing me. I wish I could remember where I got it -- it's an ex-library book and I remember it is connected to my best friend in some way, but I can't recall whether she bought it for me specifically as a gift, or she just gave me her copy. Forever grateful either way.

8. Summer Pony - Jean Slaughter Doty (1973)
The book that started my love affair with Doty's pony books -- because what's more of a dream, if your parents have land but can't afford to outright buy a pony for you, than getting to borrow one for the summer? (there is also an adorable sequel, Winter Pony)

9. The Comeback Dog by Jane Resh Thomas (1981)
A young boy mourning the death of his dog nurses a stray back to health, but is frustrated and upset by her initial lack of affection in return. I still have the miniature book report I wrote on it in 4th grade, with the teacher's comments and the A+. (Let me relive my glory days.)

10. Jim Ugly - Sid Fleischman (1992)
The adventures of twelve-year-old Jake and Jim Ugly, his father's part-mongrel, part-wolf dog, as they travel through the Old West trying to find out what really happened to Jake's actor father.

It's weird because I don't actually remember loving this book as far as dog books went, but somehow it stuck around our house on the assumption my younger brother might like it, and even though he turned out not to be a big reader at all, I'm pretty sure it's still there and I now think of it as a classic. I'd also wager a guess that if I reread it, lines would hit me in that Staggeringly Familiar way of books you read young and often. I can sense lines about pine-box coffins and diamonds and a rope collar/leash brewing in my memory as we speak. That's how this beat out like 57 other candidates for the last spot on the list.

Note: Anonymous comments and/or those with URLs are screened and will be unscreened at my earliest opportunity, even if it says they are flagged as spam.
Tags: top ten tuesday
Subscribe