"Nothing lasts longer in memory than childhood reading experiences."
--Anita Silvey, 100 Best Books for Children
This week's Top Ten Tuesday is a really fun topic, which is why I had to super-size it, and I look forward to being equal parts enraptured and dismayed by other people's answers. It also makes a smooth transition from last week (if you missed it, since I was too chicken to post an off-topic link to the roundup: 10 Childhood Books I Enjoyed But Rarely Talk About).

I was a voracious little reader in childhood, devouring books even faster than I do now, and I feel that despite my penchant for series books I was pretty widely read. This feeling has been confirmed by 2020's deep dive into books about children's books and being proud of how many on the older "best-of" lists I've read, and largely enjoyed.

However, I didn't get to all of them. Few kids can; it gets harder ever year to consume all the classics because newer classics keep being created. Thus, while compiling this list, I decided it needed 2 parts. Books I missed in childhood...and books that sadly didn't exist when I was a kid, because I have read some solid middle grade in the last 10 years that matches well to the books from my memories.

In both cases, titles were chosen largely from books that I enjoyed as an adult, or think I would enjoy, but feel like I would have given them a full 5 stars (or if I already did, would have loved them even MORE) had I latched onto them earlier, because no matter how good a book is, it's different when you experience it for the first time as a kid.

Side note: I'm defining childhood as "under 13," because there isn't really any YA that I think I would have gotten more out of if I'd read it as a teen versus an adult. In fact, it's often just the opposite.

Part I: Books I Missed As A Kid 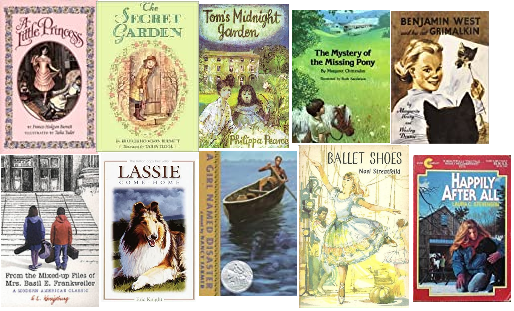 1. A Little Princess - Frances Hodgson Burnett
2. The Secret Garden - Frances Hodgson Burnett
IDK how I missed the boat on these despite my mom loving them, because I don't remember consciously rejecting them the way I rejected many other critical and popular classics. I enjoyed both when I read them this year, but not with that wondrous childhood love so many people have for them.

3. Tom's Midnight Garden - Philippa Pearce
Another one that appears on many best-of 20th century children's book lists, yet one I'd never heard of before this year. Still haven't read it but want to.

4. The Mystery of the Missing Pony - Margaret Chittenden
Per my review: not a Lynn Hall book, but since it IS a Garrard Mystery Book and illustrated by Ruth Sanderson just like The Mystery of Pony Hollow, I have trouble remembering this fact. Total book twins, complete with the interior Garrard style of black-and-white sketches accented with a single color. I wish I'd had this to add to my trio of beloved Lynn Hall mysteries, which form some of my happiest childhood reading memories.

5. Benjamin West and His Cat Grimalkin - Marguerite Henry
I read all the Marguerite Henry I could get as a kid and still consider her a favorite author, but this was one of her less-popular novels that went out of print before my time. Between the male protagonist and the focus on art, it just didn't grab me when I finally read it.

6. From the Mixed-Up Files of Mrs. Basil E. Frankweiler - E.L. Konigsburg
A teacher recommended The View From Saturday to me when I was in 6th grade and it was AWFUL, and that pretty much soured me on Konigsburg before I could try this classic beloved by so many. This sounds way better, plot-wise. But honestly, I'm still too petty about the boring pointlessness of TVFS.

7. Lassie Come Home - Eric Knight
I've read what feels like every dog book in all the land since the moment I could read, including a bunch of Albert Payson Terhune's collie tales...but somehow I never got around to this one, and every time I think about doing so now, I just can't muster up the enthusiasm. It's Too Well Known! No animal-themed book that is so widely known could possibly be good, says my suspicious brain, because most people don't appreciate the kind of books that are sufficiently animal-centric for my tastes.

8. A Girl Named Disaster - Nancy Farmer
I didn't hear of this book until I was an adult, some 15 years past its publication. Absolutely baffled how I missed this when it slots in so nicely with other girl-centric adventures Julie of the Wolves and Island of the Blue Dolphins.

9. Ballet Shoes - Noel Streatfeild
I had never heard of this author until a few years ago. Still haven't read it. But it seems like a famous favorite of many and I was in dance as a kid, so I feel like I would have really related to this.

10. Happily After All - Laura C. Stevenson
I debated including this "kid goes to live with unknown mom after dad dies, must adjust to living w/ a stranger on a farm on opposite end of the country but gets dogs and horses out of the deal" story because I DID instantly love it with my whole entire heart when I read it as an adult, but I know I would have loved it as a kid too, and I probably would have read it multiple times as a kid. So this is the one on this list where I just wish I'd had it in my life for more years.

Part II: Books That Didn't Exist When I Was A Kid 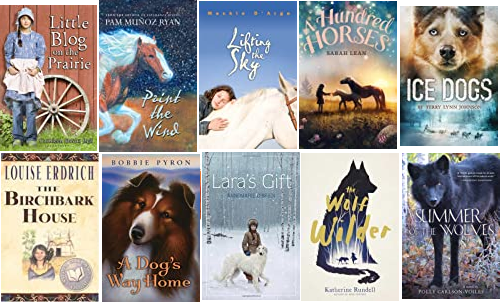 11. Little Blog on the Prairie - Cathleen Davitt Bell
Girl's mom signs the family up for a resort camp where you live like the pioneers. Very "The 1900s House, but make it touristy." Her voice rang a little young and sometimes bratty to me as an adult reader, but as someone obsessed with Little House series, I suspect I would have eaten it up circa age 11-14 myself.

12. Paint the Wind - Pam Munoz
This is a thick book and very close to 5 stars from me as is, but this is basically the DREAM book for me circa age 9-12, featuring a horse-loving girl + the story of a wild mustang.

13. Lifting the Sky - Mackie D'Arge
See above, though there are fewer horses and it's more about a girl trying to adjust to her new home on a ranch and making friends with a Native American boy (set in the modern day).

14. A Hundred Horses (a.k.a. A Horse for Angel) - Sarah Lean
It was a little simplistic for me as an adult but I know I would have been thoroughly enchanted at age 8-11.

15. Ice Dogs - Terri Lynn Johnson
A good read at all ages, but I feel I would have been more personally invested in the adventure at a younger age.

16. The Birchbark House - Louise Erdich
This has been described as "the Ojibwe Little House," and as a person obsessed with both Native American stories (particularly Ojibwe, a local tribe) and the Little House series in elementary school, it would have been a perfect marriage of my interests. Technically this came out when I was 13, but I didn't read it until later and I think age 9-11 would have been the ideal time to encounter it, so it goes in this half.

17. A Dog's Way Home - Bobbi Pyron
A variation on Lassie (remind me again why I don't think I'd enjoy that one?), the dog story is great, but I feel like I would have identified more with the girl at a younger age. Like Terri Lynn Johnson, Pyron probably would have become an author I read everything from.

18. Lara's Gift - Ann Marie O'Brien
I didn't fully connect with this when I read it (though I will always love O'Brien for somehow unearthing a contact to long-retired Lynn Hall and interviewing her), but I could tell I would have loved it more as a kid, thrilling to the then-still-rather-mysterious idea of historic Russia. My review: 5 stars from elementary-school me, I think. Imperial Russia, beautiful Borzoi, girl-and-her-dog bonds; what's not to love?

19. The Wolf Wilder - Katherine Rundell
Speaking of historical fiction in Russia...this is pretty realistic and quite good, but the author mentioned she "wanted to write something that felt like a fairytale would be if it was transposed on to the real world," which is accurate and not a bad thing, but not really my wheelhouse. I was more accepting of and open to fairytales when I was younger, so I think it would have enhanced the story then.

20. Summer of the Wolves - Polly Carlson-Voiles
Like number 10, this is an exception to the rule; I did love and 5-star this one, I just think it would also have been an exceptional gift for my wolf-obsessed childhood self, who had not yet learned about dissection and other hard parts of science classes and still had "wildlife biologist" as a viable career idea.

P.S. I didn't find it until I'd already written the post, but on O'Brien's page, I just found her link to "101 Best Dog Books" and I now have at least 57 new answers.

Your Turn: I know a lot of TTT bloggers are around my age, but a fair few are younger so I'm curious to know if any of the books in part II actually were read in childhood. Or, from anyone, any that you also missed and/or that are still on your TBR. I'm even curious to know if there are any here you looked at and went "nah," declining to read on purpose, because I know not even widely accepted childhood favorites appeal to all.

Note: Anonymous comments and/or those with URLs are screened and will be unscreened at my earliest opportunity, even if it says they have been marked as spam.
Tags: top ten tuesday
Subscribe