I just sorted my “books I own” shelf on Goodreads by date published, and while this admittedly only accounts for books I’ve read, I’m pretty sure it’s accurate regardless given that I buy all my books secondhand.

Turns out the newest book is an early-2019 novel that is a rare instance of me buying new…but otherwise the publication year starts at 2017, of which there are exactly two before it jumps back to 2016.

And then because I was curious, I counted up how many 2010s-published books are on the list: 62. Now, I definitely own more early-2010s books that I haven't read, but for simplicity's sake, just counting those, I made a fun little chart of where they came from. 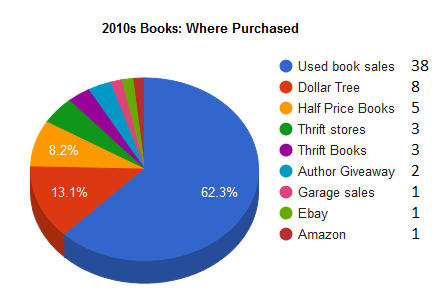 Edit: I decided to have some more fun with my data, so I tallied up the publication decade of all 363 books currently on my 'owned' shelf -- which represents less than half the total I actually own, but we're just looking for preliminary data here.

One day I would like to know exactly which decade is best represented in my personal library, because my money is on the 60s (all the best old animal books) and the 90s (when I grew up and was getting lots of books new). However, I haven't read a lot of my older books, so based almost entirely on just the books I own that I have also read, it looks like this: 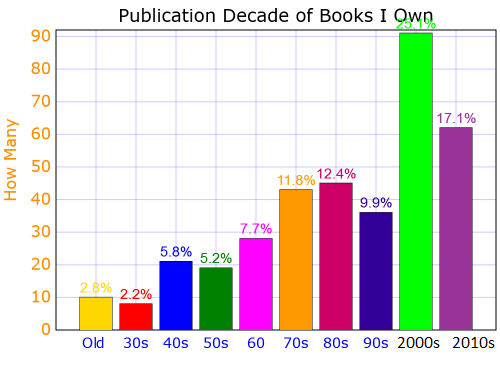 note: original publication year does not necessarily equal actual year my edition was published
that's a whole different game (which I also plan to play someday)

Which I guess makes sense, given that I mostly read library books, I frequently buy books I've already read, and there would be a lot of overlap at used book sales between books I've read from the full-of-new-and-almost-only-new books library, and books that are 3-10 years post-publication, just about the right age at which to be shed by their first owner doing some shelf-cleaning. Whereas most of my childhood 90s books, I probably haven't read since high school if not before, so they're largely not tracked on GR yet.