This week's Top Ten Tuesday topic at That Artsy Reader Girl is one that stumped me until about 10 days ago, when I decided to focus on favorite picture books -- because I do, after all, smile whenever I rediscover a forgotten favorite on Open Library, or reread certain books on my shelf.
-
Being who I am, I will of course also be doing my level best to select and shine a light on obscure faves. If anyone else knows these, you'll make my day.
-

1. Frolic's Dance - Valerie Harms
A snowshoe hare, hunted by lynx and other predators, discovers courage and friendship in an attempt to help a young moose calf in trouble.

One of the Smithsonian Wild Heritage series, which tell stories of young wild animals in their natural habitat with a bit of anthropomorphization, I was shocked by how little internet presence this has -- must have been a small press; not sure where my parents got it -- but it has beautiful, detailed paintings. And I really loved Frolic. I had a stuffed white bunny of my own that I named after her, though from a store and not the one apparently officially produced as a companion to this book.

2. Fritz and the Beautiful Horses - Jan Brett
Fritz, a pony excluded from the group of beautiful horses within the walled city, becomes a hero when he rescues the children of the city.

I could have chosen from a great number of hers that I love equally well, but I feel like none of her illustrations are quite so stunning as the beautiful horses (and 1 scruffy hero pony) of this title.
- 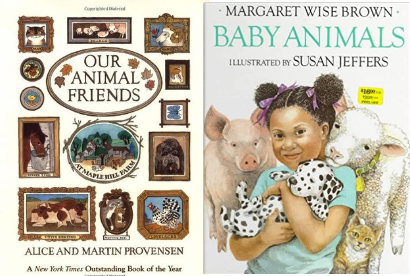 I never owned a copy of this until I was an adult, but this was my number 1 library fave. I checked it out over and over (as well as A Year At Maple Hill Farm), absolutely obsessed with every animal on the place and their illustrations, which were based on the authors' real life.
-
4. Baby Animals - Margaret Wise Brown
Relates the morning, noon, and evening activities of several young animals and a little girl.

This edition, specifically. This is my newest rediscovered fave, and I'm REALLY ANNOYED that I can't find any interior illustrations online because I gasped in such delight when I recognized the cute little girl on the cover, with her Dalmatian puppy and her puff hairstyle, that I wonder what the rest of the book is like. I have to assume great, because MWB, even if I can't remember a thing.
-

-
5. Holly's Farm Animals - Jill Krementz
Holly introduces the animals on her "hobby farm" where animals are raised for fun, not as a business.
And thus did Young Me both learn the term "hobby farm" and begin to dream and scheme of living on one someday (this did not come to pass). Nevertheless, I memorized every animal in these photos - horses, cats, a bunny, geese, goats, and a puppy in training to be a guide dog - and thought Holly here was livin' the dream. Still do.

6. The Whales' Song - Dyan Sheldon
Enthralled by her grandmother's story of seeing and hearing whales singing in the sea long ago, Lilly hopes to see them herself and to hear their mysterious songs

I think I appreciate this more as an adult than I did as a kid, as the oil painting illustrations are a bit dark, but this is a book that was given to me by a family friend when I was 5 and it is a seriously high-quality piece of art. Plus, there is a beautiful element of magic and mysticism to this tale.
- 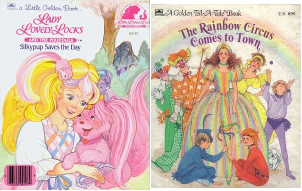 -
7. Silkypup Saves the Day - Kristin Brown
Silkypup saves the day when the scheming Duchess RavenWaves tries to steal Lady LovelyLocks's comb, mistakenly thinking it is a source of magic.

Now for the EXACT OPPOSITE of that, time for an uber-bright, lighthearted and very cheap & commercial Little Golden Book. Back then I had absolutely no idea that Lady Lovelylocks was a TV show. I just had this one book about a princess with beautiful long hair, and her horse and her dog who also had beautiful long hair, and her little squirrel-type friends who had similarly long, flowing tails. This could not possibly have been more Me.
-
8. The Rainbow Circus Comes to Town - Joanne Ryder
A small book with short, simple text, but each page had the most dazzling illustrations featuring various acts of the circus, each dressed in a different color, parading down the street ahead of the big show. I could study them for hours. Especially the one of the girl with her six little white dogs doing tricks.
-

-
9. Meet My Cats - Lesley Anne Ivory
The author introduces her dozen feline companions, noting the special traits and virtues of each

Oh look it's yet another version of my dream life, arranged as a miniature pet biography. Beautifully detailed illustrations -- the author has a quite a career in illustrating other cat-themed products, from calendars to cards, and it's pretty easy to see why.
-
10. I Want a Dog - Dayal Kaur Khalsa
When her parents refuse to get her a dog, May creates an imaginary dog out of a roller skate.

Love the vibrantly colored illustrations, including the cover that I knew long before the painting it is based on. This book spoke to my dog-obsessed soul. Even though I thought the idea of her dragging a roller skate around was dumb, I would have done it for a pup of my own. Much like I hoped that if I too walked around the neighborhood with salami in hand, some dogs might show up and follow me for a while.

As it was, I tied a cloth belt around the neck of a hard-framed battery-operated toy, and because he was too slow on his own, I "walked" him up and down the streets by bouncing him up and down into a sort of rhythmic trot. I called him Blue, before I forget it, and I can't figure out what brand he was but it was the same as this dog, except splashed brown and white all over like a basset hound: 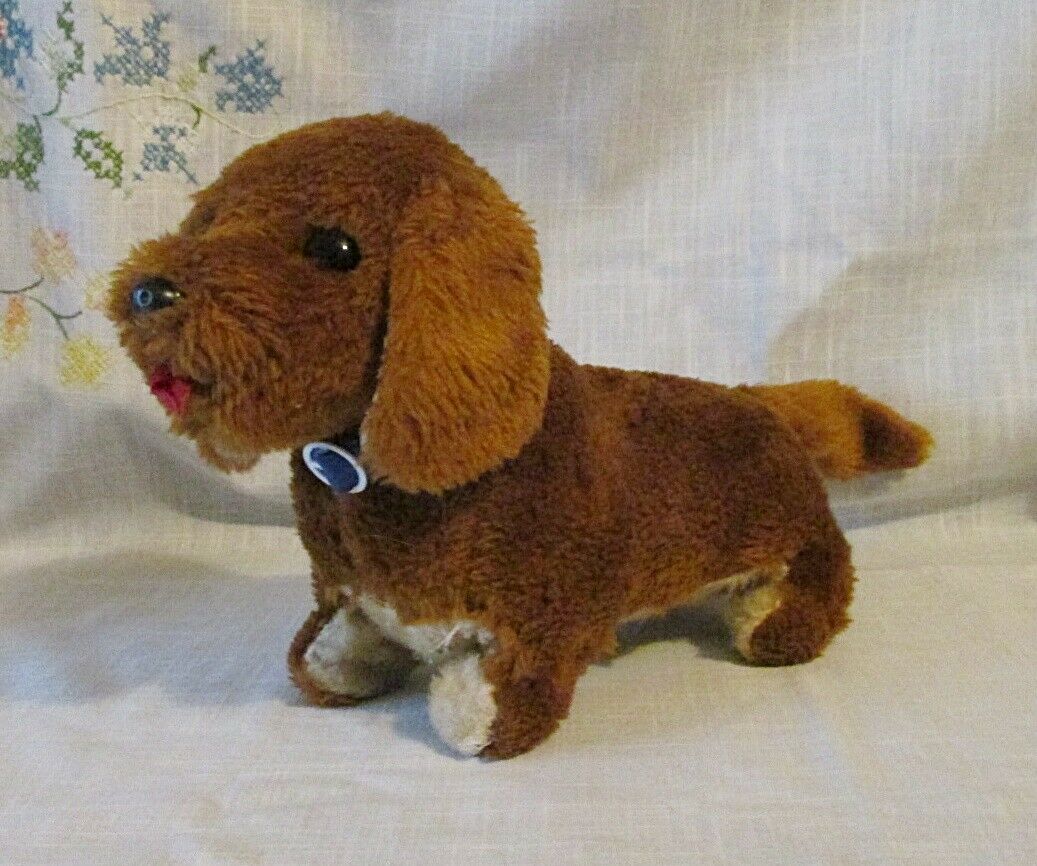 (side note: for non-LJ friends a.k.a. all Top Ten Tuesday readers, we did finally get a real dog when I was 12. Happy day!)
-
P.S. Special bonus for anyone who got here 24 hours late, like when authors reward you for procrastinating on your purchase by adding extra content to the paperback edition: my rediscovery of Animal Inn!
Note: Anonymous comments and/or those with URLs are screened and will be unscreened at my earliest opportunity, even if it says they are flagged as spam
Tags: top ten tuesday
Subscribe