This is probably going to be the only year in my lifetime where August is the peak summer month for garage sales, but after a very suppressed June and barely more active July, now everyone is slowly poking their heads out and cautiously setting up driveway shop after all. People all wear masks (both shoppers and sellers) and touch stuff less, but they're happening. And while cruising Craigslist I found a whole EIGHT of them within two blocks, so I obviously had to go.

Took me almost 30 minutes instead of 12 to get there because I took a wrong turn, and I was definitely nervous about only having $9 in my pocket for that many sales, but I was so late getting out at all that I didn't want to waste more time stopping for extra cash first, since I often spend less than $5 on any given outing.

And I had so much fun! I almost petted a short-haired speckled black and white dog, then I thought maybe I shouldn't just in case people are worried about germ transfer through touching the same hairs (among the top 10 worst things about COVID, tbh. that it feels impolite to pet strangers' dogs).

However, I did buy a super cute polyester-spandex summer frock for $3 -- Mossimo brand, so look, I found a stock photo online! 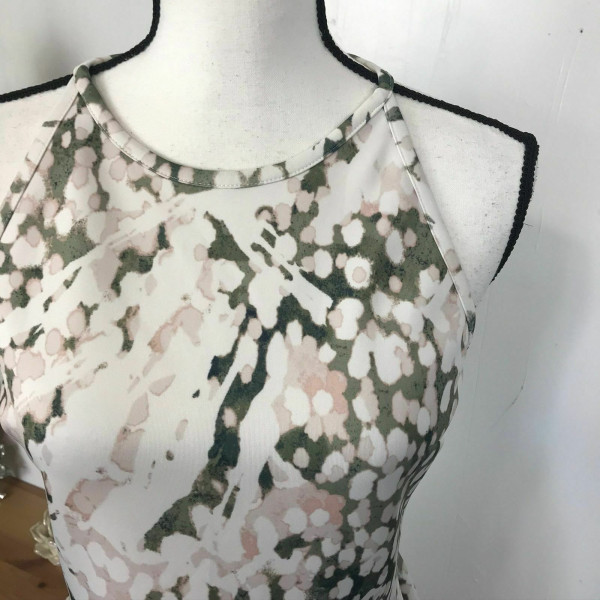 Click photos 2 enlarge. First one I highlighted the black in a bit via Pixlr because it was so washed out; it's really the same amount of white background as in the close-up shot.
The most majestic thing is I'm definitely not as skinny as a mannequin, but the material of this dress is such that it looks like that on me. We stan a figure-flattering-but-not-skintight dress. Only issue I need to get a strapless or halter-top bra...but I'm sure I can do that, right? That would just be good to have regardless. I need new bras anyway.

For $2 I bought a black cotton-feeling rayon/spandex blend knee-length Soma brand dress, the top half a solid black plunging v-neck (needs a camisole) and the bottom a wrap skirt style, bright paisley-type patterns in all kinds of colors on a black background. Also knee-length. Also 50 cents on super-soft loose-legged workout capris, but they ended up being too big.

At the last sale I stumbled upon a bookish treasure chest. I saw one nice old horse paperback...and then I saw 4 more in the same box. I looked to my left, and there was ANOTHER box stuffed full of old paperbacks. They are definitely of the cheap-and-worn variety, mass-market (mostly Scholastic), really not great, BUT they did include a bunch of old animal books so I just started snatching and ended up with 7 in my stack:

1. Desert Dog - Jim Kjelgaard
2. A Horse Called Mystery - Marjorie Reynolds (my collection of her work grows!)
3. A Pony Called Lightning - Miram Mason, illustrated by C.W. Anderson (cruddy ex-library hardcover, binding shot, won't keep -- but had to read it)
4. Mystery Horse - Margaret Geoff Clark
5. Free Spirit (movie cover edition) f.k.a. The Ballad of Belstone Fox - David Rook (basically the British Fox and the Hound, except with more focus on the actual sport of foxhunting)
6. The Children Who Stayed Alone - Bonnie Bess Worline (this book comes up every so often on lost-book forums)
7. Aaaand what will now be my second Scholastic paperback and third overall copy of Don Stanford's The Horsemasters. I just...currently the cheapest copy online is selling for around $30 and it's described as water-damaged. This one isn't in great shape either, but I just couldn't let a potential moneymaker like that go.

They were not priced, so I asked, how much?

Also bought a random 50-cent CD by a Margaret Becker, whom I suspected and can now confirm is a Christian singer, but it was released in 1999 and it had that look of maybe appealing to me, and oh hey check this out:
"One of gospel music's first female rockers, Margaret Becker abandons her rock roots for an adult contemporary/pop sound on her 1999 release, What Kind of Love."

That's it, that's exactly what That Look said to me.

Things I Did Not Buy
-Jan Brett's Noah's Ark, because it would be my luck to stumble upon someone who thinks their dust-jacketed hardcover picture books have enough value to be sold for $1.50. I might have bought it if I hadn't found anything else that day, though. Actually, now I kind of regret not buying it, because I don't want to read any of my paperbacks right now and I do wish I had those illustrations to pore over.

-A super cool family-scrapbook-making kit based off The Metcalfe Family Album, in a lovely box. Mostly did not buy it because it was unpriced and I didn't want to pick it up and carry it over to ask if it was gonna be more than $2; also did not want to haggle; also knew damn well I would never actually use this kit and would Just Think It Was Neat. Save your cash for the book merch you know you really want, self: Nick Bantock stuff. Specifically Capolan.