10 Books I Loved But Never Reviewed

This week's topic at That Artsy Reader Girl is a good one, because I actually have a Goodreads shelf called "reread before reviewing," which largely consists of favorites I read prior to age 20 that I KNOW I loved, yet inexplicably can't remember enough about to write even a short review and/or loved so much that I want to make sure the Official Review does it justice, which requires that the text be fresh in my mind. I finally succeeded with Little Women earlier this year; surely other rereads are not far behind! (they are)*
*OR ARE THEY. See bottom of this post
- 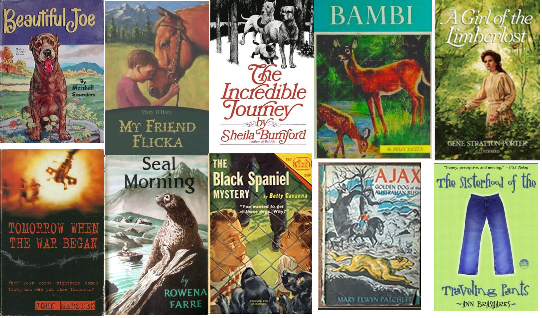 -
1. Beautiful Joe - Marshall Saunders
The canine counterpart to Black Beauty (which also qualifies for this list, but I've already mentioned it on TTT a lot), equally memorable. Apparently there are multiple editions as the text was repeatedly changed and sanitized for young readers, so I'd love to compare some too. The copy I read was the midcentury Whitman edition.
-
2. My Friend Flicka - Mary O'Hara (1941)
Of all the classics I need to revisit enough to review...I read the whole trilogy in middle school, and I remember liking them all, but I feel like I'd maybe appreciate them more now.
-
3. The Incredible Journey - Sheila Burnford (1960)
I loved Homeward Bound; I obviously had to read this as soon as I learned that movie was based on a book. The book is every inch as good.
-
4. Bambi - Felix Salten (1923)
Speaking of beloved movies that I devoured the book version of as soon as I learned they existed...I remember far, far less about this one. Only that I loved it. Also, wow, I must have read this in middle school; it's not on my reading lists. There's a sequel! Did I read the sequel??
-
5. A Girl of the Limberlost - Gene Stratton Porter (1909)
Back in high school, when it was still feasible for me to do this, I made a list of my top 100 books of all time and this was on it. I had an incredible summer reading experience with this, pulled randomly out of the library. I want to recreate that before I say anything further.
-
6. Tomorrow, When the War Began - John Marsden (1993)
This book made such a huge impression on me, but I don't remember much of what happened beyond the first chapter. Also, wildly enough, I just learned that I only ever made it to the second book in the series (7 total). For as big a place as it retains in my memory, I am SHOCKED.
-
7. Seal Morning - Rowena Farre (1957)
I haven't the faintest memory of this story (memoir? fictionalized memoir?), but the 4.5 stars on my reading list and the awesome-looking cover make me want to revisit it.
-
8. The Black Spaniel Mystery - Betty Cavanna (1945)
Currently one of the biggest sources of shame on my Goodreads account because this is a 2018 read that I haven't reviewed, rather than an old childhood memory. I just couldn't figure out how to put my heart-starburst of love into words. Still can't. And it so deserves it! Especially since no one else on the internet has reviewed it either, besides Kirkus Reviews from 75 years ago (OH GOD WHAT IS TIME).
-
9. Ajax: Golden Dog of the Bush - Mary Elwyn Patchett (1953)
From an Amazon review: A true story of how this girl grew up on a station in Australia surrounded by dogs, horses, goannas and other creatures, with a native girl for a playmate and a fear of being sent away to school. Her golden half-dingo dog Ajax is a pup at the start and grows up with a fiercely protective love of his owner. They encounter floods, snakes and other dangers. The other half of the tale is 'Tam the Untamed' about her wild white stallion, which became the model for 'Brumby'.**

I own this book, and have since high school (in a Scholastic edition retitled to simply Golden Dog whose cover I can't find on the internet)...so rereading shouldn't be a big deal, yet somehow I still haven't??

**not to be confused w/ the other 1950s children's book series about a wild nearly-white stallion, the Silver Brumby
-
10. The Sisterhood of the Traveling Pants - Ann Brashares (2001)
I reviewed the fourth book (briefly and without detail), but nothing before that. I would give anything to know what I thought of it on first read, when I was 18. All I have to go on is that I gave this book 5 stars, the next book 4, and the third book 3 before shooting back up to 5 stars for the finale.

UPDATE: between drafting this post a month ago and now, I did actually manage to reread this one! (and the 2nd book too, for good measure) I am still kind of at a loss as to how to create a coherent review for either, but I sure rambled a lot about it a couple of weeks ago! So maybe a proper Goodreads review will happen soon.
======
Note: Anonymous comments and/or those with URLs are screened and will be unscreened at my earliest opportunity, even if it says they are flagged as spam
Tags: top ten tuesday
Subscribe