Top 10 Books That Should be Adapted Into Netflix Shows/Movies

Note: this is a queued post and will be linked to the main one when I get a chance.

This week's topic at That Artsy Reader Girl was "submitted by Nushu @ Not A Prima Donna Girl," and a very good one it is indeed. At first I thought, "Oh, I won't be able to do this one, I have no ideas!" but as soon as I started trying, I actually came up with more than enough ideas and had to cut myself off. I split it up by category, albeit not quite evenly.
-----
Movies

-
1. The Vanishing - Wendy Webb
Recently widowed and rendered penniless by her Ponzi-scheming husband, Julia Bishop is eager to start anew. So when a stranger appears on her doorstep with a job offer, she finds herself accepting the mysterious yet unique position: companion to his mother, a famous and rather eccentric horror novelist whom Julia has always admired -- and whom the world believes is dead. When she arrives at the Sinclairs' enormous estate on Lake Superior, Julia begins to suspect that there may be sinister undercurrents to her "too-good-to-be-true" position.

Honestly, pretty much any Wendy Webb book will do, this is just the one I like most so far. Ingredients needed include: big old historic mansion, an inheritance secret, a mystery from the past, preferably some big fluffy dogs, and ghosts.
2. Sara's Face - Melvin Burgess
Sara is going to have a face transplant. She has allowed herself to be drawn into the orbit of a highly manipulative and ruthless pop-star. He is going to take her discarded face to cover his own scarred and damaged one. But as the time of the operation approaches, those closest to her suspect that Sara is changing her mind. Is she being pressured into it? Is the wealthy pop-star her benefactor - or her gaoler?

I don't remember this well (like, why is Sara/ANYONE fine with the concept of a face transplant from a healthy living donor in the first place??), but I remember it spooked and unnerved me a lot, and I think it would translate well to Netflix's brand of fast-paced, low budget action/thriller.

3. The Whisper Man - Alex North
j/k I actually think this one should be a big budget movie, or at least made by a British TV network, but I'm going to mention it anyway because this book made enough noise that I actually do not think this is an unrealistic prospect, and I absolutely NEVER get interested in popular books immediately upon their release. The universe owes me one.

4. The Last Woman in the Forest - Diane Les Becquets
Marian Engström has found her true calling: working with rescue dogs to help protect endangered wildlife. Her first assignment takes her to northern Alberta, where she falls in love with her mentor, the daring and brilliant Tate. After they’re separated from each other on another assignment, Marian is shattered to learn of Tate’s tragic death. Worse still is the aftermath in which Marian discovers disturbing inconsistencies about Tate’s life, and begins to wonder if the man she loved could have been responsible for the unsolved murders of at least four women. But as she reexamines her relationship with Tate and circles ever closer to the truth, evil stalks her every move.…

Another great potential thriller, featuring beautiful winter forest settings and sure to be SUPER CUTE dogs alongside the murderer/stalker plot.
-
TV Series 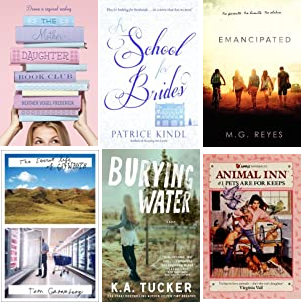 -
5. The Mother-Daughter Book Club - Heather Vogel Frederick
I mean, it's already a series! Plenty of material. I would summarize but it's basically what the title suggests: four girls in middle school whose mothers cheerfully decide they will all be in a book club together (whether the girls like it or not), studying classic novels about women/girls. Many adventures beyond the actual reading/discussing of books ensue.
6. A School for Brides - Patrice Kindl
The Winthrop Hopkins Female Academy of Lesser Hoo, Yorkshire, has one goal: to train its students in the feminine arts with an eye toward getting them married off. This year, there are five girls of marriageable age. There’s only one problem: the school is in the middle of nowhere, and there are no men.

Why make another Jane Austen adaptation when you could do a DIFFERENT Regency-era story? With the same if not more levity and comedy?? By the way, nobody in the book said lesbians* because men do come along eventually, but Netflix would definitely say lesbians and I'm okay with that.
*they might have and I just missed it

6.5 ALTERNATIVELY: on a slightly similar theme, but a bit younger and more girl-power-centric, Shannon Hale's Princess Academy would also make for a good girls school story.

7. Emancipated / Incrimnated / Vindicated - M.G. Reyes
The good girl, the bad boy, the diva, the hustler, the rock star, and the nerd. Six teens legally liberated from parental control for six different reasons, all with one thing in common: something to hide. Now they’re sharing a house in Venice Beach, acting like a family, and living their lies. No parents. No limits. No alibis. One witnessed a crime, another might be a murderer—and one’s been spying on them all.

Now the opposite of cute and fluffy: this trilogy was not outstanding literature, but it was wild and ridic and I'm sad it did not get the readership it deserved, so I'm highlighting it here. Even in my (short, punchy, spoiler-free) reviews I compared it to a TV show (book 2: "This series started as The O.C. and came back as How To Get Away With Murder"), and there's plenty of room to flesh out the characters more than they were on the page. I think it would be just as well served to condense the three into a tightly plotted action/adventure movie, though.

8. The Secret Life of Cowboys - Tom Groneberg
This is a memoir, but it is a great premise for a series: a suburban-raised college grad heads out west to gain his first work experience on ranches (in sharp contrast to how ranchers are usually born and raised in that life) before starting a cattle ranch of his own.
9. Burying Water - K.A. Tucker
Left for dead in the fields of rural Oregon, a young woman defies all odds and survives—but she awakens with no idea who she is, or what happened to her. Taken in by old Ginny Fitzgerald, a crotchety but kind lady living on a nearby horse farm, she slowly begins building a new life. But as she attempts to piece together the fleeting slivers of her memory, more questions emerge: Who is the next-door neighbor, quietly toiling under the hood of his Barracuda? And why does it feel like she recognizes him?

I just wanna see the town of Sisters, Oregon. And the farms. Also maybe the fancy mansion that serves as Alexis' gilded cage. They sound so beautiful. You COULD condense this to a movie, but I think if Virgin River's first book (with elements of the second) can be 10 episodes long, so can this. (But also, make the script better than Virgin River, because that is Hallmark bad.)
10. Animal Inn (series) - Virginia Vail
Recent decision made as of this post. Thirteen-year-old animal lover hoping to follow in the footsteps of her dad, who runs his own small town vet practice? And of course also has tons of pets at home? "NETFLIX PULL IT FROM OBSCURITY AND MAKE A KIDS SERIES" CHALLENGE.

For slightly better name recognition I would also support the Animal Ark series instead (same premise, 2 parents), but despite being the perfect age to have discovered them new, I haven't actually read any of those/never heard of them until I was an adult so I can't 100% vouch for it.

P.S. Special shout-out to Netflix for recently adding the adaptation of Katherine Center's The Lost Husband, which I had no idea was gonna be a movie until after I read the book in May. It turned out to be one of my favorite reads of the year, and while the movie in no way looks like it will live up to the version in my head -- mind you, I am a person who often thinks the adaptation is as good as the book -- I was still hoping I could see it and kind of despairing of my options for doing so. But then I logged in to Netflix last week and SURPRISE, THERE IT WAS.
-
Note: Anonymous comments and/or those with URLs are screened and will be unscreened at my earliest opportunity, even if it says they are flagged as spam.
Tags: top ten tuesday
Subscribe