Note: this is a queued post and will be linked to the main one when I get a chance.

This week's open-ended topic at That Artsy Reader Girl is "Books For My Younger Self," so I'm taking it very literally in order to do one I thought of a few months back. I've done a few posts on childhood faves already this year, including an entire massive post that is basically this topic but wordier, so in this post I'm going to do my best to highlight titles I've not mentioned before, with a few exceptions.

I was fortunate, as a kid, to have parents who not only fostered and encouraged my love of reading, but were very indulgent about letting me order from the Scholastic Book Club catalogs the school sent home with us -- I was almost always allowed to choose 1-3. The thrifty book purchaser in me now can't even imagine allowing my hypothetical children to do such a thing, especially if the bindings are still as crappy as they were in the 90s. Maybe they can pick out a couple of choices a year, as a treat. But in my hypothetical parenting defense, I think used book sales are a much bigger and more commonplace thing now, and I would take them to those instead.

Regardless, while I am sure my folks sadly wasted their money on many a title, other books were truly worth it. These are some of my fondest memories. 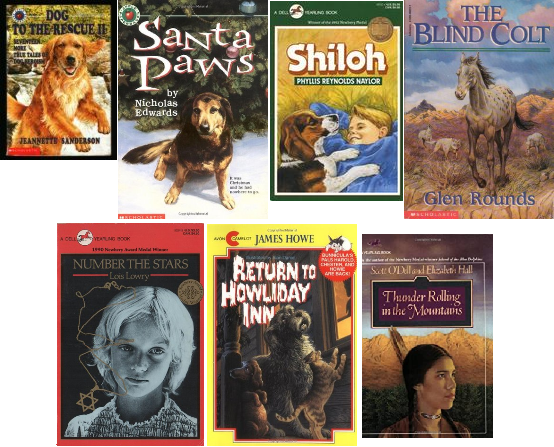 (there are a full 10, the picture sizes just wouldn't cooperate for my usual formatting because so many of these books are 2 Obscure 4 Goodreads, so there are more below)
1. Dog to the Rescue (and Dog to the Rescue II)
I still have these books, though they are falling apart, because they're so good! I learned about so many heroic dogs. Most of them from decades before the 90s.

2. Santa Paws - Nicholas Edwards*
I only ever got as far as the sequel before I aged out, but this is a great story about a scrappy stray mutt who could have been featured in the above collections.

3. Shiloh - Phyllis Reynolds Naylor
Yes, it's common and well known now, but I bought it as a brand-new release, and no other cover can hold a candle to its original detailed illustrated one.

I never did read the sequels...

4. The Blind Colt - Glenn Rounds
This is a very slim book, but by far the most beautiful cover edition of this story. I'm now somewhat sorry I let it go, in my "I don't need these skinny animal books anymore now that I have better animal stories" days.

These were slim books featuring stories of girls w/ beloved horses, often but not always in a historical context. Clipper the Tennessee Walking Horse from Changing Times was my favorite horse, but Spirit of the West was my favorite book.

And then, while looking them up on Goodreads -- where it turns out there are more than twice as many books as I knew about -- I found out they were apparently also sold LIKE THIS??? *grabby hands for Young Me* 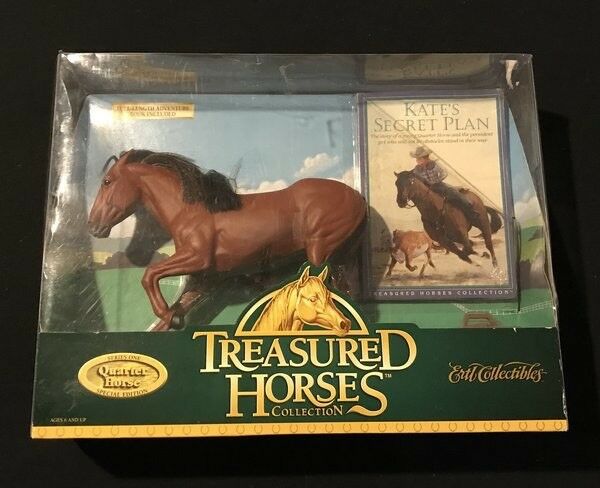 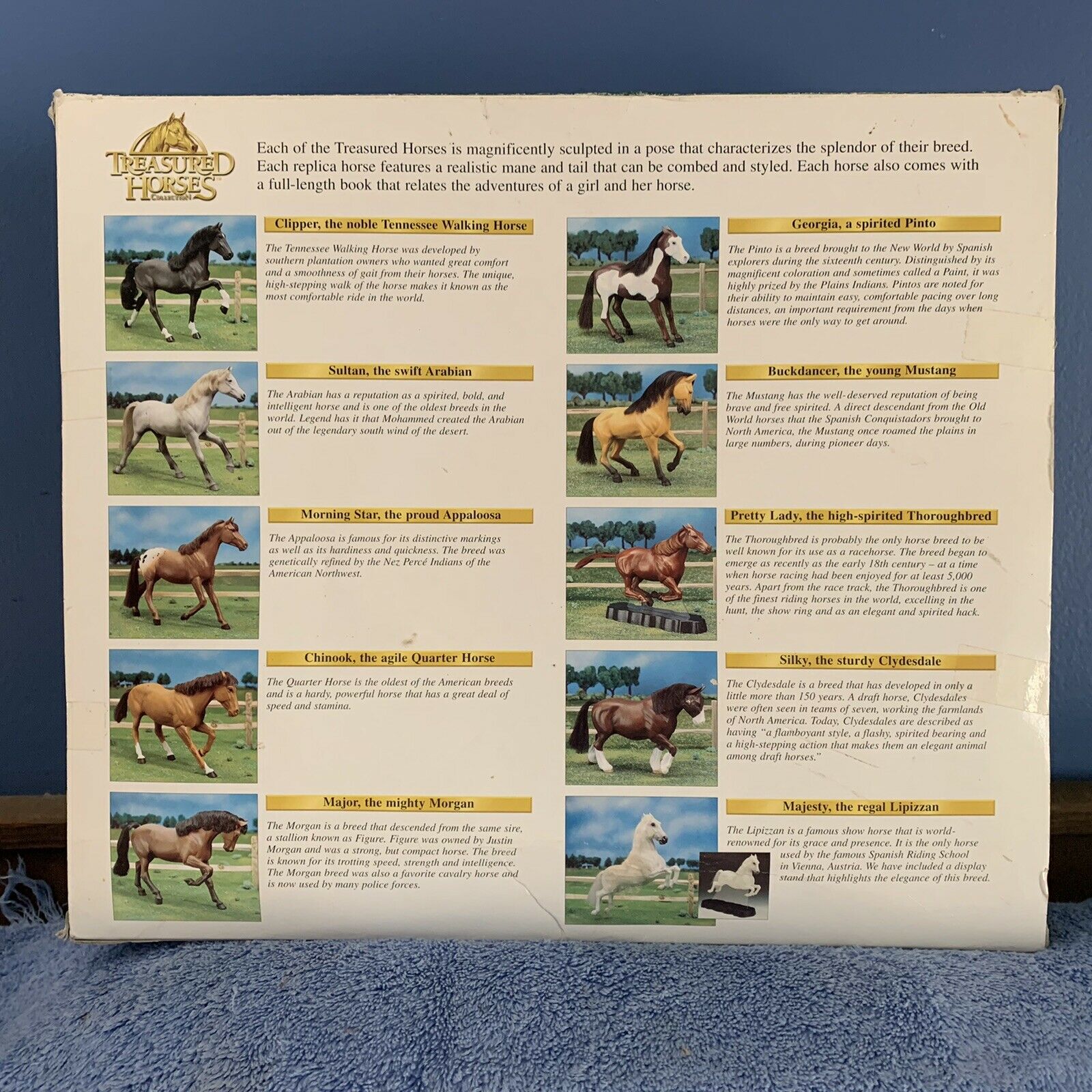 (click images for full size to read the details on the back)
6. Number the Stars - Lois Lowry
Probably inspired by learning about Anne Frank, I had a brief surge of interest in Holocaust stories about Jewish girls, culminating in this rare departure from animal books. Still my favorite book of hers, by far.

7. Return to Howliday Inn - James Howe
I had read Bunnicula and other books in this universe from the library, but this was the only one I ever owned. Still have it. It's just a delight.

8. Thunder Rolling in the Mountains - Scott O'Dell (edit: and, oops, Elizabeth Hall!)
I could have chosen any one of about half a dozen Native American novels, had I remembered this aspect of my childhood interests sooner (Echohawk! The Listening Silence! Runs With Horses!), but I'm going to select this one based on its author and the fact that it's about a Nez Perce girl, which means horse-inclusive. It's a sad book, as it's about their last days of freedom, but very well done.

I believe the first 3 were sold in a set. It took me a long time to give them away, even after I had upgraded to the inarguably superior original hardcovers with color plate illustrations and endpages, because I was so attached to the beautifully illustrated covers (which I actually do like more than the originals, in the only known instance of a Wesley Dennis drawing of a horse not being the best). Haven't replaced the last one yet, though.

10. Top Dogs! Scrapbook - Randi Reisfeld
One of the few books I've remembered reading and then lost the title of, I spent ages searching for it online. I'm honestly kind of sorry I got rid of it now, even though it was just a floppy softcover about the size of a kids' magazine. Each 2-page spread had a photograph of a famous film or TV dog and a list of fun facts about them. This is how I learned about SO MANY movie & TV dogs, both those I had encountered and those I had not. 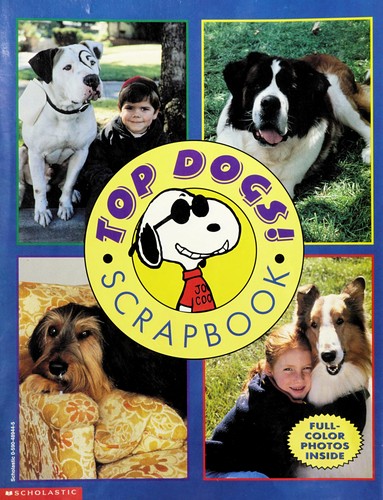 Bonus: over the course of my elementary career, there were also plenty of dollars put toward Animorphs, Boxcar Children, Bailey Street Kids, Goosebumps, and Thoroughbred books, and definitely a few horse and kitten posters as well. I know this because those posters lasted for 20 years on my walls (longer than a lot of the books).

Bonus fun fact: I asked my fiance what kind of stuff he used to order, and he said without hesitation, "Animorphs." But also, apparently, Newbery books. "I got it into my head that if it had a Newbery, it must be a good book. Even though that wasn't always true." Awww.

Your Turn: tell me of your memories with Scholastic book orders, I beg of you.

Note: Anonymous comments and/or those with URLs are screened and will be unscreened at my earliest opportunity, even if it says they are flagged as spam.
Tags: top ten tuesday
Subscribe