First (Perhaps Only) "Used Book Sale" of the Year

I put this on Tumblr originally but should put it here too, for organization purposes. Now with updates/edits, exclusive to Livejournal!

All the used book sales are canceled this year for obvious reasons*, but my local Friends of the Library decided to put together a "curbside sale" to sort of make up for it. You reserve your bag(s) online, then drive up, pay, and receive a pre-filled bag of 10 books from the category of your choice.

[*Side Note: Three days after my visit, the sale shut down "out of an abudance of caution to allow volunteers and staff to quarantine due to a case of COVID-19." R U KIDDING ME.]

Anyway, the bags cost $5 apiece, which is a real gamble for random books, but it's also the cheapest and best risk : reward ratio of a "blind box" gamble I will ever make outside Neopets, so I decided to go for one to support the library. (Local restaurants? Small businesses? Don't care. This, I believe in.) I picked YA because that seemed like the one most likely to hit vs. miss on the selections.

Which I now realize was a DUMBASS thought process because a) adult fiction comprises a good half of the fiction I read these days, and b) I completely forgot that unlike general adult fiction, YA doesn’t separate out the trash category fantasy that has been the rage in YA over the last several years (”trash” is a reflection of its personal value to me. I don’t judge anyone for reading it).

This is what I received: 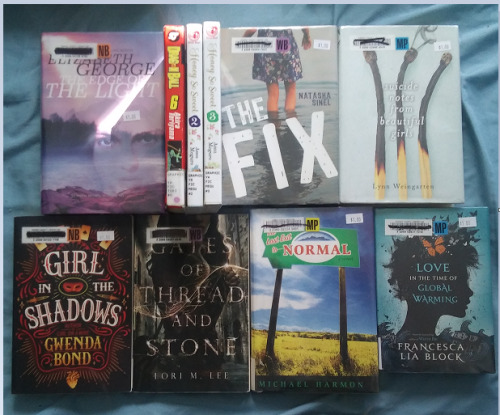 I DEFINITELY forgot that YA could include manga. GROSS. THESE SHOULDN’T EVEN COUNT AS BOOKS (not among the 10 I’m paying for, anyway). I cannot believe a full 30% of my bag was wasted on Dragon Ball-Z and whatever "Honey So Sweet" is. Looks like I have a lot of Little Free Library fodder to give away. [edit: at least I was able to pawn the Dragon Ball-Z off on Chris' nephew, who apparently loves it!]

Anyway, here are my specific thoughts on the 7 actual books I got; links to Goodreads included:

1. The Edge of Light - Elizabeth George (2016): Pass. This is book 4 of a quartet that is very pretty on the outside but which I have never had any interest in.

2. The Fix - Natasha Sinel (2015): Maybe? Never heard of it, suuuper don’t love the “recovering addict boy” aspect when she’s already dating “the cute boy next door,” but it otherwise looks as solidly contemporary as it gets so I may give it a shot.

[edit: I gave it a shot and I gave up on page 70 before skimming through to the end and confirming it's gross and frustrating and every character is infuriating; to preserve my blood pressure, I will not elaborate.]

3. Suicide Notes From Beautiful Girls - Lynn Weingarten (2015): Nothing wrong with this one per se, but I’ve passed it up numerous times at the library because it does not sufficiently compel my interest. However, I did read another book by this author that was decent (Wherever Nina Lies), so now that it’s here I might as well try. At least it’s contemporary.

[edit: I have read this one and it's not amazing; I definitely won't keep it, but it was entertaining enough to be worth the read, even though every character in this book is terrible too. Toxic and co-dependent and, it turns out,

actively homicidal, which honestly was so bonkers that it actually improved things]

6. The Last Exit to Normal - Michael Harmon (2008): Actually the best looking one of the batch?? Hits my “parent comes out as gay and breaks up kid’s home” annoyance button right off the bat, but since the story is set 3 years after that, I’m kind of interested in seeing his dad’s new relationship and more importantly, the small town Montana setting.

7. Love in the Time of Global Warming - Francesca Lia Block (2013): Love her! But haven’t read her in ages, and I’m not sure a dystopian post-apocalyptic future with “clone giants” is the way I want to come back – I’ve seen this novel before and gone “eh” to it. But it’s short, so I might try.

In Conclusion: I wish I’d gone for general fiction instead. My brain defaulted to assumptions about dreary prizewinning literature and dude books when I decided against that one, when actually I bet at least some of it would have been contemporary women’s fiction (…of course if it wasn’t I would have been just as mad at myself for not shooting for YA). Or just spent that $5 on one book I KNOW I want from my wishlist.

That said...when I picked up my bag it came with a flyer saying they’re going to be starting a bookstore website next month, where you can select your choices online and then pick them up curbside/pay by cash or check, similar to this process.

Part of me is like, “cool of you to withhold this info until I was tricked into thinking this was my only shot to nab books for less than $4 a pop,” but most of me is just SUPER THRILLED, because I’ve actually been wondering if it was possible to set up something like that without having a whole pay-online storefront and all the processing fees that would entail (you pay in cash or by check when you pick them up).
Tags: book sales
Subscribe