Ten Books I Want To Reread

[note: this is a queued post and will be linked to the main one when I get a chance]

Twelve days from now I was supposed to be getting married, but because of new restrictions we've postponed it to Sometime (tentatively a week later, but I fear the odds are good the restrictions will continue through the end of the year and we'll have to reschedule again). So I guess the good news is I have time to do TTT this week (maybe even comment??), because this is a really fun topic.

Honestly, I could do this list about four times over just scanning my high school reading logs -- or I could have made it about books I own that I want to reread* -- but let's see which lucky 10 shake out first from memory alone. 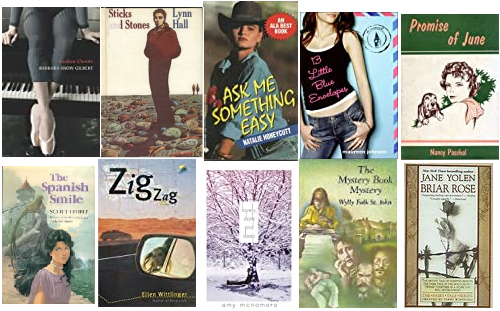 * of this list, only #7 & 8 qualify
1. Broken Chords - Barbara Snow Gilbert (1998)
This book about a young pianist who isn't sure she wants to take her (incredible) talent to professional study in college was such a 5-star book to me in high school that at the time, it made my list of "100 Best Books Ever." I don't remember much of what happens, but someone was looking for it in the lost-book forum recently, and my educated guess that this might be it brought it back to the forefront of my conscious thought. I don't know if I will still love it with as much intensity as I did then, but I imagine it's still at least a 4-star read. Also, I feel like I might enjoy the romance more now.

2. Sticks and Stones - Lynn Hall (1972)
A seventeen-year-old boy's life is nearly destroyed when a rumor that he is homosexual is started in his new high school.

Ever since I started reading 20th century teen lit biographies, and seen how often this one comes up as groundbreaking and how much I missed about the subtext in my surface-level "cool, just innocent friendship!" reading, I've wanted to revisit this one by my fave.

3. Ask Me Something Easy - Natalie Honeycutt (1991)
After her father leaves the family, Addie must cope with her increasingly hostile, distant mother, perfect older sister, and sensitive younger twin sisters.
Out of all the pre-2007 books I can't remember, this is one of the ones that tugs at me the most. I rated this 4.5 stars in high school and yet have ABSOLUTELY NO MEMORY OF IT. But I love this cover, I like that it's an "ALA Best Book," and I really want to know what happens in the 10 years this book spans!

4. 13 Little Blue Envelopes - Maureen Johnson (2005)
I read this a year after its release, unaware of any hype surrounding it until much later, and was very dazzled by it. One of my earliest "armchair vacation" novels. I would like to revisit her trip, not least because this time I would like to read the sequel (for the first time) afterward.

5. Promise of June - Nancy Paschal (1955)
One of the "career romances" of the fifties, this one is the surprisingly engaging story of a girl who wants to be a sculptor and her various trials and tribulations in getting there.
LET ME REVISIT THIS WORLD! I don't remember a single thing that happens in it, but I read it in college and rated it 4 stars.

6. The Spanish Smile - Scott O'Dell (1982)
Lucinda lived like a princess on her father's private island off the coast of California, Isla del Oro. But she was really a prisoner, shut off from the world, never allowed off the island. Then Christopher Dawson, a young archeologist, came to the island and into her life. And Lucinda began to realize the horrifying truth about the island . . . and about her father.

I barely remember this one, but I remember it being one of my favorites of his. And until I looked it up on Goodreads, I had no idea it had a sequel!

7. Zigzag - Ellen Wittlinger (2003)
Since her boyfriend is leaving for the summer, rising senior Robin agrees to join her relatives on a cross-country road trip, despite her reservations -- she and her younger cousins have never really gotten along, and it's worse than ever following her father's death. Still, the four of them are soon zigzagging through the West on an eye-opening journey.

I've nearly reread this book several times in the last couple of years. I think I'm waiting for a) summer and b) a trip where a small, compact paperback is exactly the right book choice. Also, I just realized this character is exactly my age. I get weirdly happy when I trip upon good YA novels that feature characters born in the same school year I was. It's such a narrow window to match!

8. Lovely, Dark and Deep - Amy McNamara (2012)
In the aftermath of a car accident that kills her boyfriend and throws her carefully planned future into complete upheaval, high school senior Wren retreats to the deep woods of Maine to live with the artist father she barely knows and meets a boy who threatens to pull her from her safe, hard-won exile.

Between the setting, her library job and this hurt/comfort-y romance, this is a semi-sad but comforting read I have long planned to revisit.

No memories of this at all -- this one I want to read so I can solve The Mystery Of Why High School Me Gave This One Singular Star. Not even 1.5, when that was an option I gave myself, but ONE. I did not give many 1-star ratings; I had to HATE the book and/or find it deathly ungodly boring to do that. And I cannot find anything objectionable in the summary or reviews at all. WHAT WAS MY DEAL?? (Aslo this is the best pen name ever and I've never read any of their other work)

10. Briar Rose - Jane Yolen (1992)
Sleeping Beauty crossed with memories of Holocaust horrors. Assigned for class in 8th grade, 8th Grade Me was in awe of this book. I remembered it for years. I wonder now if I'll still feel that way (I fear not), but I'd like to find out if I could at least see why it blew my young mind.

Note: Anonymous comments and/or those with URLs are screened and will be unscreened at my earliest opportunity (though sometimes they take a bit to show up). You can also create a free LJ account for ease of commenting.
Tags: top ten tuesday
Subscribe