The Last 10 Books I Donated

This week's topic at That Artsy Reader Girl is a "spring cleaning freebie," which sounded even more fun than last week. ("For example, books you’re planning to get rid of for whatever reason, book’s you’d like to clean off your TBR by either reading them or deciding you’re not interested, books that feel fresh and clean to you after winter is over, etc.")

I don't normally keep track of the books I get rid of, because that's a surefire way to make sure I go back to that info regularly, i.e. think about them often enough to start regretting my decision to unhaul as opposed to letting the victims naturally fade from memory, but I'll make an exception this week because it's fun to share my reasoning.

Appearing on this list doesn't (always) mean they're bad, it's just that I'm the lady with roughly 1000 books at last count, less than half of which actually fit on shelves at this point, so I'm always trying to cleave off anything to which I have minimal emotional attachment. On the bright side, at least Sunk Cost Fallacy is rarely a factor in these decisions; all books below were purchased secondhand for $2 or less apiece. 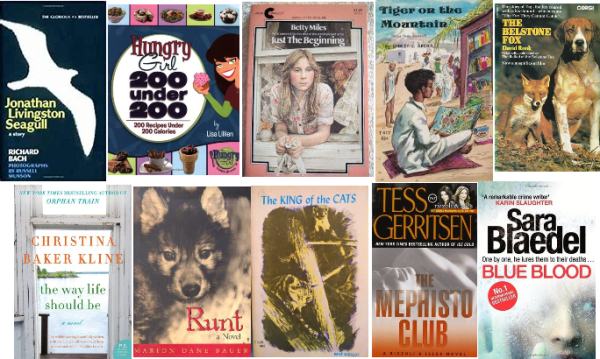 click for full size
1. Jonathan Livingston Seagull - Richard Bach (1970)
I found this on the floor while cleaning out my closet and immediately yelled BYE! I bought it ages ago when I didn't actually know what it was about, and now that I do it sounds dreadfully dull. "A homily about self-perfection"?? Yeah I have no time or space for frauds that dress themselves up as animal books while actually being about human nature and/or philosophy.

2. Hungry Girl: 200 Under 200 - Lisa Lillien (2009)
I grabbed this at Goodwill because I have no cookbooks and I remember The Hungry Girl Diet actually being a really useful guide, but upon reading reviews I realized that most of this book's 200-or-fewer-calorie recipes are "desserts/dessert-like" and rely on a lot of expensive substitutes and/or processed ingredients -- not nearly so appealing.

3. Just The Beginning - Betty Miles (1976)
Honestly a cute 70s middle-grade read, and the hardest of the bunch to let go as a result. I'd recommend the author and book for sure, but cute alone won't get you permanent shelf space in my overcrowded realm without an animal in the story, even if you're vintage.

4. Indian Two-Feet and His Horse - Margaret Friskey (1959)
I snagged this solely because of the cover. Which is far more detailed and colorful than the bland, cartoonish illustrations (with made-for-a-3-year-old text) from Ezra Jack Keats inside.

gonna get whiplash from whipping my head right to left and back in disbelief at the contrast in quality here
5. Tiger on the Mountain - Shirley L. Arora (1960)
A lovely story of an impoverished Indian (actually Indian this time) boy who loves to read and is torn between earning money for his family or books, in a beautifully compact and vintage Scholastic pocket edition that makes it hard to let go, but I know this is not one I'll want to refer back to again.

6. The Belstone Fox - David Rook (1970)
I saw part of the movie version on TV and was like "British Fox and the Hound!" so I grabbed this at a garage sale, but upon further examination and this review in particular, it seems aimed more at adults/VERY heavily dependent on (outdated?) British customs/class structure I have no context for, and generally just doesn't seem as much about the animals as The Fox and the Hound. I skimmed through a couple chapters and was bored by the writing itself. Realizing he also wrote snoozefest Run Wild, Run Free sealed the deal.

7. The Way Life Should Be - Christina Baker Kline (2007)
I got it at a library sale after loving "Orphan Train," but after skimming through this I didn't feel any immediate connection to the main character. I'm def. not opposed to trying it again someday, as it seems like good contemporary women's fiction, but in the meantime, there's no reason to keep it close at hand.

8. Runt - Marion Dane Bauer (2002)
This compact hardcover about a young wolf pup is so attractive I was tempted to keep it, but tbh, while I admire Bauer as an author, most of her work lacks the something-special oomph to retain appeal for me as an adult, and she can't compete with the many authors of children's and/or animal-centric books that do.

9. The King of the Cats - Rene Guillot (1959)
Nice for kids, but now that I've added it to Goodreads and written a suitable enough summary + review to remember it, nothing special. Cat was too anthropomorphic for my animal-book collection.

10. Rizzoli & Isles #6: The Mephisto Club - Tess Gerritsen (2006)
I was super thrilled with the series when I read it so I started collecting cheap copies, but now it's a few years later and I'm thinking, this one wasn't among my top half and it doesn't have a ton of shippy moments either, so I'm unlikely to want to revisit it.

Bonus #11 because I accidentally put in two number-sixes earlier and I'm not changing it now:

11. Blue Blood (f.k.a. Call Me Princess) - Sara Blaedel (2011)
One of those crime thrillers that you have to read cover to cover to find out what happens, but have no need to ever touch again because it's honestly 0% memorable. (Plus this cover's creepy as hell)

Your Turn: Have you read/are you planning to read any of these? If you had a different take this week, what are some of the books YOU most recently donated/sold/otherwise passed on?

Note: Anonymous comments and/or those with URLs are screened and will be unscreened at my earliest opportunity. I apologize if it says you've been banned from commenting when you try to use an outside account; I don't know how or why it does that and I can't fix it, but it should still work if you post on anon. You can also create a free LJ account for ease of commenting.
Tags: top ten tuesday
Subscribe