Note: This is a queued post and will be linked to the main one when I get a chance. Original prompt/linkup post can be found over at That Artsy Reader Girl.

My first thought, upon skimming over recent reading lists, was that I don't read very many books w/ funny titles.

But since I had several weeks to ponder this post, I started browsing through not only my TBR and older reading logs, but also my favorite kind of books on OpenLibrary: 20th century bibliographies of teen & children's lit. It turns out the last 3 decades of the 20th century were just FULL of wacky titles.

All of these are fiction, with one exception for a memoir that doesn't have a subtitle, because nonfiction is too easy -- it often sells itself on having outlandish titles, but then the subtitle clarifies its content. Novels are just like, "come and get it, make of these words what you will."


1. Bass Ackwards and Belly Up (and sequel: Footfree and Fancyloose)
Honestly, I took to this phrase like a duck to water. "Bass ackwards" is fun to say AND technically keeps me from swearing!

2. Rumple Buttercup
See, these are both perfectly normal words on their own, but put them together and suddenly it's a hilariously weird monster name that is also fun to say.

3. Marie Antoinette, SERIAL KILLER
I read this 90% because of the ridiculous title. It's funny because the latter half isn't actually written in all caps, but that's definitely how I say it in my head every time. Dramatic pause, then DRAMATIC EMPHASIS.

4. Middle School Is Worse Than Meatloaf
Absolutely it is. (side note: the sequel title was so bland by comparison - "Eighth Grade Is Making Me Sick"? WHAT IS THAT)

5. The Whingdingdilly
A childhood favorite, not least because who doesn't love saying this over and over??

6. The Last of the Really Great Whangdoodles
Basically, you start with a "wh" and end with a "ng" and maybe throw a D and an L in there somewhere and it's funny.

7. The Cat Ate My Gymsuit
Even though it's all the way down here in 7th place, this was one of the first titles that spontaneously came to mind. I just wanted to gradually work up the humor levels along the way. Who among us has dared to be so ridiculous??

8. How Do You Spank A Porcupine?
This is a real question, more or less, based on the struggle to effectively discipline a naughty baby quill-pig (the book is a memoir about raising an orphan one).

9. How God Got Christian Into Trouble
DARN IT, GOD!! (I couldn't find a cover for this one but I assure you it's real)

[How did this occur, you may ask?]("God assumes the form of a young child and spends a few days with eleven-year-old Christian Wolny in New York, meeting his family and friends, going to church and school, talking about life, death, and love, and affecting people's lives in various ways.")

10. How A Weirdo And A Ghost Can Change Your Entire Life
Don't you wanna know??

11. If This Is Love, I'll Take Spaghetti
I am pretty sure the title is the best part of this book of short stories, yet I remember it fondly (if dimly) for that reason.

a. Things you might call your man if he messes around on you
b. Playground insults
c. Two characters in a children's book

13. Hey, That's My Soul You're Stomping On
So rude, amiright?

14. I'm Really Dragged But Nothing Gets Me Down
Full disclosure, I have been laughing at this for ten minutes.

15. I Like Being Killed (a.k.a. its equally funny title, Don't Read This Book If You're Stupid )
I was going to end at 14, but then I saw this in an antique mall a few days ago and by george, this sounds like something a guy who's really dragged might say after something finally got him down, doesn't it?

Which one is your fave? 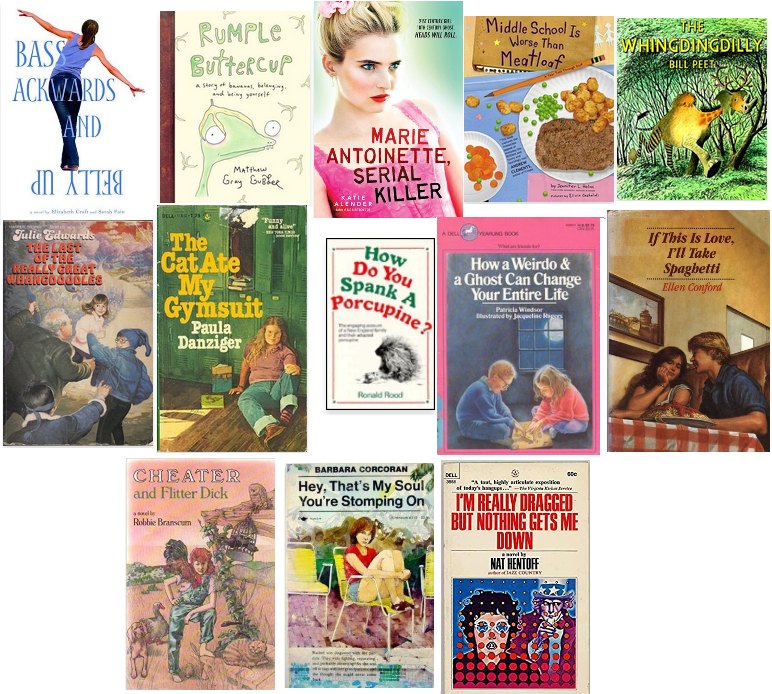 (sorry I'm missing the last one - I found it after I'd made the collage and I'm too lazy to re-upload)
Note: Anonymous comments and/or those with URLs are screened and will be unscreened at my earliest opportunity. I apologize if it says you've been banned from commenting when you try to use an outside account; I don't know how or why it does that and I can't fix it. You can also create a free LJ account for ease of commenting.

P.S. This whole 8-5 work life thing is kicking my butt (I'm on day 4 btw), and especially given that I have essentially no downtime or internet time during that period (despite having to be on a computer for most of it, which is The Worst Of All Worlds), I'm finding my computer time super restricted. I don't even have time to read most of the other TTT blogs, let alone comment on them! But I will try to get to yours, if you comment.
Tags: top ten tuesday
Subscribe