I did not stick to my summer list like at ALL -- I only finished numbers 4, 5, and 8, though they were all worth it, especially the latter two, and I still really want to read them all sometime. Partly because I got distracted by Sudden Unexpected Tamora Pierce Rereads, partly because I just got SUPER in the mood for thrillers, and also partly because I have FINALLY, in the year of our lord 2021 and not one month earlier*, turned into one of those people who browses the internet from her phone, so I'm always scrolling Libby and getting distracted by new titles on a weekly basis (often literally new, not just to me). The trend of reading whatever catches my eye will probably continue. But for right now, at least, these are some of the titles I'm most interested in:


*and yet I still use phone-internet more than my dad (who barely even uses it on a computer), my mom (who got her first smart phone yesterday), and my brother (who continues to eschew them and uses a phone so old I can't believe the network still supports it). (Meanwhile, my husband uses his so much he has an unlimited data plan, and even spends more time watching TV on his phone than on our Extremely Large & Fancy Roku TV.) 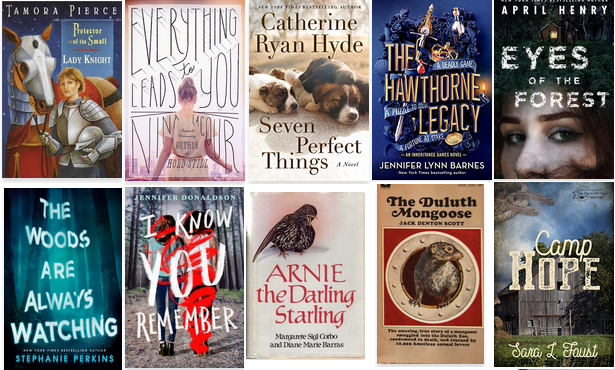 1. Lady Knight - Tamora Pierce (2002)
I have been sitting here WAITING for the lone remaining library copy for almost a month now, and at this point there is a significant chance I'm going to be so out of the rhythm of the Tortall world when it does come in that I just go "screw it" and up in the same place I did 20 years ago, where I read the first three in the Protector of the Small quartet but never got around to the last one. Still, hoping not. It is my dream to reread the Alanna books next and then finally get to the books about her daughter.

2. Everything Leads to You - Nina LaCour (2014)
I've been really stubborn about wanting to read NLC's books in chronological order, ever since I read and loved her first one shortly after its publication and then have just been...watching them stack up ever since while I waited to be in the mood, but I finally read The Disenchantments a couple weeks ago. And though I liked more than I expected, this one has always looked better, so I'm really excited to keep that momentum going!

3. Seven Perfect Things - Catherine Ryan Hyde (2021)
Love this author; also PUPPIES!; also omg there is nothing I love like a kid meeting/bonding with a wonderful nice man and scheming to make him their stepfather. Just gotta pick my players -- I know there's a perfect cast for the man and girl somewhere...

4. The Hawthorne Legacy - Jennifer Lynn Barnes (2021)
After loving the first book, I struck fast and landed in the 2nd round of checkouts, so I should get this by the end of the month or first week in October.

5. Eyes of the Forest - April Henry (2021)
After a decade-long break (just like with Nina LaCour!), I'm on a new April Henry kick after discovering a slew of her bite-sized (5-6 hour) audiobooks on Libby that are just perfect for when all the ones I want are checked out but I NEED an audiobook I'll enjoy asap. While I recognize that the missing author is a thinly veiled version of George R.R. Martin, I'm going in with an Amelia Unabridged vibe and hoping little to nothing will stop me from imagining the author as someone young and hot (albeit still with an age difference, maybe 10 years?). I saw another review that said it had echoes of Stephen King's Misery, and I am ALL ABOUT THAT, SON. (update: oh wait, some dumb boy her own age is helping her solve the mystery? way less excited now. but I'll still read/listen to it)

(update 2: I read it 24 hours later and it really hammered in how Very Definitely Identical to George R.R. Martin this guy is, so boo on that. Still fun though.)

6. The Woods Are Always Watching - Stephanie Perkins (2021*) (*AGAIN? WHO AM I!!)
I didn't really love There's Someone Inside Your House -- although I did just find out that Netflix is dropping a movie version October 6th, which I'm gonna watch immediately -- and I dang sure didn't like these characters enough to want more of them, but it was compulsively readable and I love me a hiking-in-the-woods themed horror and/or thriller book, so why not?

(also...I didn't register the similarity of the title to above until just now, lol. It's like name brand vs. off brand labeling)

7. I Know You Remember - Jennifer Donaldson (2019)
Random library pull, only realizing later that I read (and liked) her debut earlier this year. Ready for another twisty mystery! With bonus Alaskan setting.

8. Arnie the Darling Starling - Margarete Sigl Corbo & Diane Marie Barras (1983 - there, that's a more sensible year)
I'm not big on birds, but I stumbled across the sequel to this memoir at an estate sale and it was just so incredible from the first page (my mom loved it too) that I HAVE to hear more about Corbo's life (born in Germany, married a U.S. soldier and immigrated here by the time she was 20, and that's just the start of her fascinating life)...and I guess I wouldn't mind hearing the origin story of the chatty bird she rescued and managed to make me fall in love with, either. 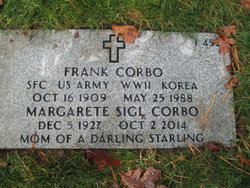 (via Find-A-Grave)
----
9. The Duluth Mongoose - Jack Denton Scott (1965)
Speaking of animal books at that estate sale, I also picked up this one. I had no idea mongooses were (and still are!) illegal in the U.S., even for zoos, but the fact that the only one we ever had lived in my home state is pretty awesome. Here's a news article about that history.

10. Camp Hope - Sara L. Faust (2018)
Just pulled this out of a Little Free Library, already know I'm not gonna like the This Is A Christian Book angle, but also...wow! Summer camp director, kidnapped foster child, foster mom takes off into the woods on horseback to look for her where the cops fail?? DIGGING IT.  Also, that cover -- like all the covers in this loosely-related 3-book series, actually -- is right up my alley; I can't stop gazing at it.

[edit #2: HOLY COW WHERE DID ALL YOU PEOPLE COME FROM. TEN COMMENTS?? Maybe I should stay up late on Monday night/get into the first 20 linked posts more often..]
=============
Anonymous comments and/or those with URLs are screened and will be unscreened at my earliest opportunity. I apologize if it says you've been banned from commenting when you try to use an outside account; I don't know how or why it does that and I can't fix it. You can also create a free LJ account for ease of commenting.
Tags: top ten tuesday
Subscribe