This week at That Artsy Reader Girl is a freebie week, and I had no idea what to do, so here's a random one a day late! Last year I diilgently recorded every book I acquired + how much I paid, but this year that plan went right out the window when I bought 25 books in January at once for roughly a dollar apiece (some were "just to read" and have already been sent on...but not all), and I've continued to accumulate $2-and-under options at an alarmingly rapid pace ever since.

A fresh round of weeding is coming soon, but until then, this is my attempt to at least begin organizing the acquisitions. 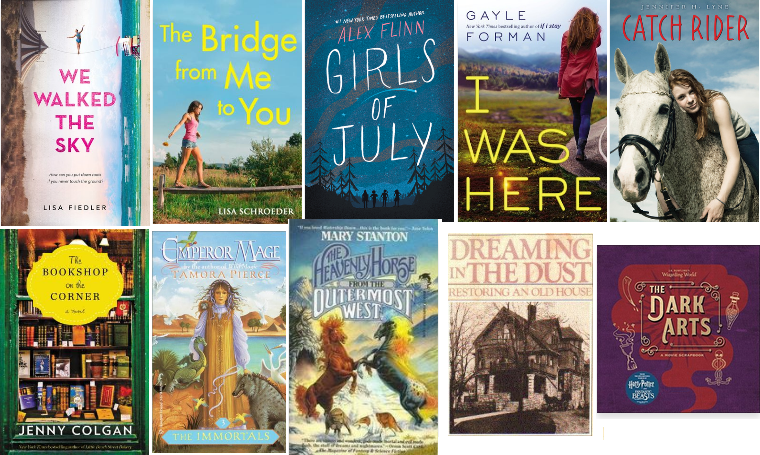 Spoiler alert, I end up mentioning more than 10...

1. We Walked The Sky - Lisa Fiedler (2019)
Dollar store find, a dual-timelines novel about a tightrope walker who joins the circus in 1965, and her granddaughter fifty years later. I read the words "box of memorabilia" and I was INSTANTLY sold.

2. The Bridge From Me To You - Lisa Schroeder (2014)
I honestly debated making this post a second edition of "best dollar store finds," because here's another one! I read it this spring and frankly have not stopped thinking about it since, so yay for having my own (hardcover) copy!

3. Girls of July - Alex Flinn (2019)
"a contemporary novel about four completely different girls and the life-changing summer they spend in the beautiful Adirondacks."

I went to a library I'd never been before for their book sale, and while waiting to get in I visited the main part and found this in the regular sale corner (separate from the book sale). Reader, I SHRIEKED. I've been dying to read this, but my local library doesn't have it and I want to make sure I read it in exactly the right mood, so an ILL request is tricky. Book secured! Alexa play "Flashdance...What A Feeling."

4. I Was Here - Gayle Forman (2015)
Same library, even better score! Because this one was a donated book rather than ex-library, a hardcover in crisp new-bookstore condition. [eta: except for being signed by the author!! specifically inscribed to a girl named Lauren, so not a ~collectible~ signature, but frankly cooler] I read this one years back, but I've never forgotten it. My favorite of her books.

5. Catch Rider - Jennifer H. Lyne (2013)
My beloved rare standalone horsey YA novel!! Also from that library, this time from the sale proper.

6. The Bookshop on the Corner - Jenny Colgan (2016)
Pulled this out of a Little Free Library -- I've been vaguely meaning to read it for a while, and the P.S. edition paperback is just so smooth and pretty...

7. Emperor Mage (among others*) - Tamora Pierce (1995)
Garage sale score, in my preferred 90s mass market edition to match the installment I already own. Since Wolf-Speaker is the only Pierce book I've ever owned, when I started the reread binge this summer and found the local library no longer had physical copies of the Immortals quartet, I went out into the world like, "Come on, book fairies, I know I don't run across her a LOT, but she's sold a hell of a lot of books over the last 35 years and at least some of them must be loose by now." This was my first score, but...

*...as of last week, I've also found Squire and Wild Magic -- neither in ideal condition, but having the text at hand will suffice for now -- and am still kicking myself for passing on two Alanna books (one because I didn't like the edition, another because I was still deciding if I really needed to own her quartet), as well as Trickster's Queen (which I haven't read, and at that point I was trying to responsible and only buy books I knew I loved). I also splurged seven entire dollars of gift card money to buy a paperback copy of Tempests and Slaughter from Half Price Books, partly for the author interview in back and partly because I figured I was not likely to find it in such good condition for a better price anytime soon. I regret nothing.

8. The Heavenly Horse From the Outermost West - Mary Stanton (1988)
Horsey fantasy book I loved in high school, when I loved fantasy a lot more than I do now, but it's one of the few from the genre I think would still interest me. I've been wanting to reread this for a while, and I managed to find it an estate sale, along with its sequel that I HAVEN'T read, for fifty cents each.

9. Dreaming in the Dust: Restoring An Old House - Katherine Chrisman (1986)
About rehabbing a historic mansion in Minneapolis. First encountered one summer at two separate sales two weeks apart, decided not to buy it because at the time I was following the "only buy books you already love" rule. Later got it via I.L.L., went OMG I NEED IT SO MUCH...and then waited another five years before I ran across it at another sale. The odds were *decent* I'd find it again, since it's about a local house, but it took longer than I thought.

10. J.K. Rowling's Wizarding World: The Dark Arts: A Movie Scrapbook (2017)
We've talked about how much I love books that have removable objects, right?? That said, I'm kind of debating whether I want to keep the book or just deconstruct it to save the cool removable paper ephemera, since this is the type of book where library stickers kinda ruin the aesthetic and I neither find the main book text that compelling nor need it to enjoy stuff like:

-a fold-out note from Dumbledore to Grindelwald
-a booklet of concept art for the films
-Wanted! posters
-Asheet of wizarding-news newspaper from the Fantastic Beasts era with tiny but readable text...and more!

Here's an Amazon link, w/ photos in the reviews.

Bonus
-My husband doesn't read very much anymore, but one he did recently enjoy was A Children's Bible by Lydia Millet, and I stumbled across a copy of this 2020 publication for two bucks at a book sale, in mint condition! Would have been even cooler if I'd found it a month earlier, while his library request was still pending, but he appreciates having his own copy all the same.

-I just mentioned it last week but I have to say again, Arnie and a House Full of Company is a 5-star hit. It is SO rare for a book I've bought without having read first to turn out to be that good!

-Another from last week, Camp Hope, also turned out way better than I expected, so I will be keeping it. 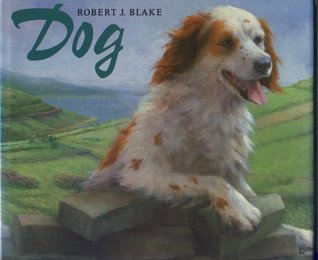 I don't normally buy picture books -- especially ones I don't have a childhood connection to -- but the paintings about this stray dog finding himself a (reluctant, cantankerous old man of a)n owner in the Irish countryside were just too beautiful. The text does not quite hold up (it's pure dialogue, erratic and disconnected grumbling statements the old man makes to the dog, or to himself about the dog), so unsure I'll keep it, but it was fun to splurge 50 cents on for charity.
==================
Anonymous comments and/or those with URLs are screened and will be unscreened at my earliest opportunity. I apologize if it says you've been banned from commenting when you try to use an outside account; I don't know how or why it does that and I can't fix it. You can also create a free LJ account for ease of commenting.