( Collapse )
---------
2. Crap. I think I might watch the Doctor Who 50th Anniversary episode after all, after seeing the trailer. I cannot explain why.

3. While I was out and about yesterday, I went to a church school sale that's never had such a sale before, so there was lots of stuff and it was a lot of fun to browse. I ended up buying 3 books (I SWEAR I WAS HOPING NOT TO FIND ANY, but c'mon --
[There were a bunch of older children&apos;s books!] 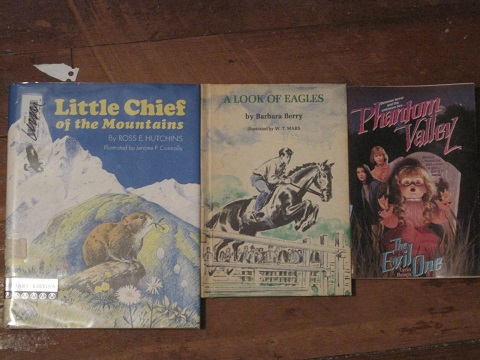 1. Little Chief of the Mountains, a picture book withdrawn from this exact school's library, and more importantly a wonderfully advanced/wordy picture book from a naturalist's perspective, c. 1970.
2. A LOOK OF EAGLES!! Horse book I've been specifically trying to find both to read and to own for a while.
3. PHANTOM VALLEY!! There were 3 other books in this series I used to check out from the library as a kid and they terrified me so much I still have nightmares about them sometimes. This one I have not read, so it may not have the same effect, but I am just tickled pink to see it. Plus, this way, I will never forget the name of the series like I have three times before.

The books cost me $1.25. Then I turned around and splurged $5 on this pair of amazing earrings: 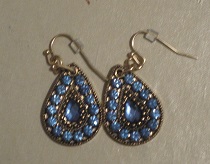 Because I was wearing this shirt (old pic, or I would be wearing the earrings to show off), and I like, fell over backwards at how perfectly matched they were; it was like they were sold as a set with that shirt. 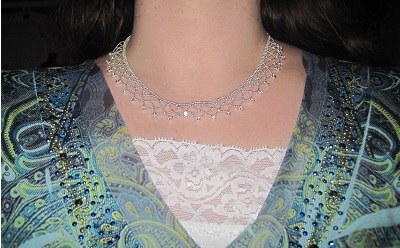 Which I guess is hard to communicate with the things the camera does to colors so they don't look like it here, but trust me, they are amazing when worn. Yes, it is really that much of a hassle for me to go change my shirt just to take a picture. Besides, I already unplugged the camera and did the whole endlessly slow transferring/uploading thing; I'm not doing that again until I have to.

). ANYWAY, the point is, while I was there they had a radio playing a station I don't normally listen to, and they kept playing all these fantastic songs I'd never heard but instantly liked, so it finally broke me out of my Glee Sings the Beatles kick and now that station is what I'm listening to in the car. I also felt like they had kind of a weird sad theme going on when they played the following 3 in a row: If I Loved You, Let Her Go, and Gone, Gone, Gone.

Anybody else know and like these songs? (by Delta Rae, Passenger and Phillip Phillips, respectively) Because I love 'em and I can't wait until December to talk about them. My only problem with the first song is that I'm suddenly way more addicted to this live version and I need to...not get attached to live things over CD versions I can actually play away from the computer.
[embedded behind cut]-