Babies Are Satan's Alarm Clock, and other stories from Monday

Quite possibly my favorite thing I have ever read:
"Today the sight that discourages book people most is to walk into a public library and see computers where books used to be. In many caes not even the librarians want books to be there. [...] I'm well aware that computers have many valid uses. . . . but they don't really do what books do, and why should they usurp the chief function of a public library, which is to provide readers access to books? Books can accommodate the proximity of computers but it doesn't seem to work the other way around. Computers now literally drive out books from the place that should, by definition, be books' own home."
--Larry McMurtry, Books: A Memoir

Additional quotes I loved from said memoir and need to remember for future use:
1. "A bookman's love of books is a love of books, not merely of the information in them."

2. "There can be secondary and tertiary reasons for wanting a particular book. One is the pleasure of holding the physical book itself: savoring the type, the binding, the book's feel and heft. All these things can be enjoyed apart from literature, which some, but not all, books contain."

3. "I'm proud of my carefully selected twenty-eight thousand volume library and am not joking when I say I regard its formation as one of my most notable achievements." (NEW LIFE'S MANTRA)

I also learned a new word: desiderata, used in the context of "I had, by this time, drawn up a list of books I couldn't find and really wanted to read. A list, in other words, of desiderata." Why, I have one of those! And I am renaming it to a classier title, right now.
~~~~~~~~~
I just voted for Steve McGarrett's abs over Chuck Bartowski's sad lack of curls in recent years. I don't feel good about myself. Especially not after I saw how Chuck was losing and then remembered the former's nasty tattoos versus how I actually love the latter in spite of the haircut. Nooo, undo, undo! You have not already counted my vote, the vote is wrong!
~~~~~~~~~
Terra Nova, 1x07, "Nightfall"
Shove aside, "What Remains"! I have a new favorite.
This episode had buckets of things to love. I have broken them down by category:

Adorable Things
You know how Jim + Zoe = my favorite thing about this entire show, even beyond the marriage? Oh hello, most of an episode with just the two of them. Every time I think they've reached the highest possible plane of cuteness, they find a way to wreck the curve. Could it possibly get more precious than the secret father/daughter outing to The Museum Of All History? Time will tell, but this was pretty incredible. Plus, it came with a juicy bit of backstory from the time in the 2140s I am most interested in. 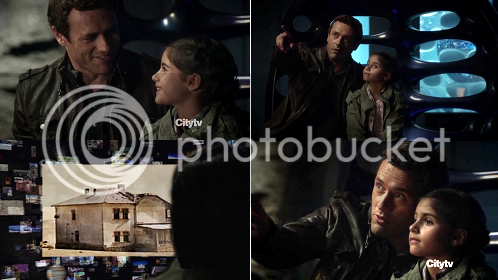 "See that? That house is where you were born."
"Why there?"
"Well, that's where we had to go, because we weren't allowed to have you. But we wanted you so much that we didn't care what the rules were. So we went to a doctor friend of Mommy's, who lived way far away from the city."

"You see that room there? There was a rocking chair right by the window Sometimes you'd wake up in the middle of the night, and I would hold you close, and I would rock you, and you would look out at the rain and fall back asleep."
Sorry, I forget, is he telling a story to his daughter or leading a seminar on ovary-exploding?

After that, aside from the excruciating secondhand embarrassment that came from the Go Away Spiders Song (I am actually crippled from it), it was everything one could ask for. Plunging the room into darkness and locking them in -- cue nervous little-girl questions and subsequent reassurance (*lives for this*). Then there are some "You're the only one who can save the day! By crawling down this scary little air vent all by yourself. Can you do that?" antics. And "Pumpkin." (Yep, I can die now.)

Oh, and one last worry in the form of a terrifying-sounding dino roar:

More Adorable Things
Loved every second of the quick scenes in the house this week. Josh in particular won every corner of my heart -- whining about his shoes (cue awesome "WTF, how old are you?" looks from dad and "WTF, it's a reasonable and polite request!" looks back), suspiciously wondering why Maddy is being so helpful and looks "kinda nice" (I LOVE THIS SNARK), and then at the end demanding to know why his mother is suddenly keen to invite Skye over for dinner (cue horrified realization that she is attempting to play matchmaker). BEST.

Also adorable: Jim smirking that nobody in this family can keep a secret.

Less adorable: way to lose track of your middle daughter for 24 hours without noticing anything amiss, guys. -.- What? I may have been looking forward to some panicked parents. I demand panicked parents by the finale.

Hospital & Doctoring Things
Skye/Hunter: I'm feelin' it. I don't want her to think of him as a brother, either. He's been as close as family since her parents died and it kills him that she's in love with Josh? These are, like, all the ingredients I need to ship that.

Obviously, it MAY have helped that we were introduced to him via medical emergency, on account of how Lurlene McDaniel taught me about romance, but I think what I liked almost as much was Skye playing (reluctant) nurse for the day, and the lovely working rapport formed immediately with Elisabeth. Yay for chemistry between all the actors!

I also love that in the future, "cutting people open" is "the old fashioned way." This is one of the few things in science fiction that seems like a reasonable technological advancement, as opposed to wild speculation.

P.S. Continuing his streak of delightfulness, I loved Josh mocking him for being hung over a week later. (Hunter: "Please tell me why we became friends with the devil.") I am starting to think maybe there should be more of the big group hangouts and less of the forced romances and Nefarious Secret Job.

Annoying-But-Points-For-Trying Things:
This was my face for most of Maddy & Mark's nonsense:

Continuing their theme from WR, they did everything that I would normally love in a ship -- a romantic outing, protective duck-for-cover positioning, a run-for-your-lives dash, a pretty/chaste kiss, and best of all: snuggling up to sleep while stranded out in the wilderness overnight -- but even if I agreed to overlook the excruciatingly, painfully awkward dialogue in the field o' flowers, they proceeded to obliterate any semblance of romance by reminding us that both kids are covered in the worst-smelling mud possible. YOU CAN'T COME BACK FROM THAT. YOU CANNOT MAKE ANYTHING ROMANTIC HAPPEN AFTER THAT. And just in case there were any lingering hopes, even a shower did not fully wash the smell off, and that was hours later. Blech.

Flat-Out Awesome Things
-An EMP? An EMP! I just learned about these a couple of months ago; it's very exciting for me. Glad to see this version seemed less cripplingly catastrophic than the one described in One Second After. I mean, some catastrophe, just less.

-"SONIC WAVE!" People ducking for cover, windows blowing out, something like half the compound requiring emergency medical attention at once for broken limbs and assorted bloody injuries. Sold! Point of note, that is at least the second time in seven episodes their outdoor marketplace has been smashed to pieces. I'm just saying. It seems delicate and abnormally vulnerable to destruction in its current incarnation.

-Sixers being badass and mesmerizingly awesful. By the way, I SO have a new favorite dinosaur. That was incredible. And terrifying. I was glued to the edge of my seat with O.O eyes.

-Hand-to-hand combat, injuring Jim what looked like no fewer than three times (cut for time: Elisabeth putting him back together again)

-Side note: someone on Tumblr (where else) mentioned that they thought Malcolm was an additional, secret spy on the inside. I hope that's not true, but nevertheless, I've been having fun double-reading all his scenes that way just in case. It's surprisingly easy.

In conclusion: Yep, new favorite of the season. I now have full confidence in their ability to top this, so for the time being, I'll sit back and enjoy the ride. Unfortunately, we're now in the second half and prospects seem dim for season 2, so...we're halfway to the end. :(

Next week: Maddy works with Malcolm (thank you), Josh's assignment starts leading down the inevitable "betray and/or potentially endanger your family" road (thank you again), and Jim is not around to sing the Go Away Spiders Song for his other daughter. P.S. Dilophosaurus. Hell yes.

+ Jamie Bamber, who seems to get more handsome every time I see him. I can't even pretend to care about his character having an affair* if it's going to give us a scene like that, which is interesting given how I normally avoid such scenes like the plague, but such is the power of his charisma (*and remember, we can always choose to believe the lie!). Meanwhile, I get to ogle appreciate him as a beloved family man complete with two precious kids. Horrifying skin-sloughing symptom aside, I was quite content to spend most of this episode appreciating his face.

+ Chase & Taub came back, and while I assumed the latter half would be unbearable, his DNA test woes provided endless amounts of comic relief (ex: Wilson: "I'm not the bad guy here. I'm betting on them both being yours. ...I would have donated the money to charity!") Does this mean Mrs. Taub finally had enough and dumped his ass for good? It seems like it, and I'm OK with it. Even though he was almost something approaching attractive while picking up one of the babies. Stupid magic power of babies. Speaking of...

+ Wilson: "If you ever hear me mention anything about wanting kids, please feel free to punch me in the liver."
Awww, now you know nobody is going to take you seriously on that after watching you push a pair of babies around in a stroller. Honestly. If anything it's just going to ramp up our efforts to get you a wife/girlfriend who will put up with House's codependency (Carla Espinosa managed it!) at least long enough to get pregnant. What? He's on the right path to become one of those men who mysteriously get more attractive with every passing year. Wheels will turn as they turn.

+ Very much enjoyed House obnoxiously prattling on about Chase & Adams hooking up. Although, careful. I have a hair trigger when it comes to shipping here since it is so hard to pair up people who are both pretty and likable. It will take next to nothing for me to believe in that. What's one failed marriage with a coworker compared to Jessica Adams?

+ Chase & Taub translating "Spy" in tandem made me laugh.

+ But not as hard as the ending. House's retractable wall! Wilson: "No." And down... XD

OH LOOK IT IS ON TUMBLR ALREADY.

#Planning to use this all of the time in the future.

I think that's everything. Now, off to watch it a second time because I am just nowhere near done with Jamie Bamber's face.
Tags: house, quotes, screencap happy, terra nova, tv commentary
Subscribe