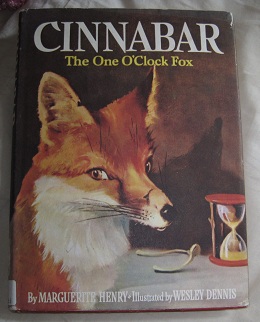 Now, this is one of the only Marguerite Henry animal stories I haven't read. Every time I have looked this book up, it has been selling for at least $10. And those are usually for copies in rougher shape, missing the dust jacket, etc. This? I found it on Abe Books for $4.39, shipping included. I took on a chance on the fact that it didn't have a photo, but it arrived in better condition than I dared hope -- ex library so the jacket is price-clipped, and it has about a billion markings + a glue stain on the back inside cover where the checkout card pocket was rubber cemented on, but the condition of the book itself is fabulous, and even the dust jacket is very near perfect.

End pages and back cover
I credit this to the fact that my copy comes to me not from a public library where children have been allowed to get at it, but from a hallowed S.U.N.Y. university library. Classy! And sad if a university is weeding treasure like this, but still, cheers for me. Having finished reading it, I don't think I like it as much as her horse books -- the foxes act like human characters and have dialogue, and it's shorter to boot -- but I don't even care, because I am a collector and this was a STEAL.

And now, here are some other things while I prove how awful I am at photographing clothing: 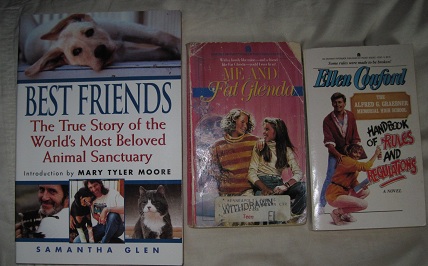 First book was 50 cents at a garage sale, where I also got to pet a Chihuahua (fact: EVERY dog is adorable in person) and talk to the super nice woman running the sale, who looked about my age and told me how she fosters dogs and wants to open her own rescue. Do you know how often I talk to the people running sales? Never. That's how nice she was.

Other two paperbacks of hilarity (Me and Fat Glenda; The Alfred G. Graebner Memorial High School Handbook of Rules and Regulations) were in a magical, never-before-seen box labeled "FREE" in the library sale room. The first one is obviously in pretty rough shape and from the 70s, but there seems to be nothing wrong with the second one and it's not even ex-library. The first one seemed like bemusing nostalgic reading, and the second one is just a fun ride. 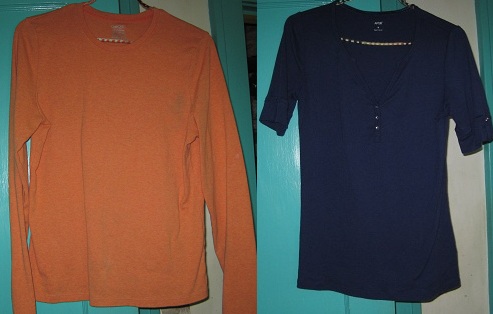 $1 for the (paler than it appears) orange shirt, because...it seemed good for Halloween and/or hometown school color pride, and also it fits me really well; 75 cents for the blue shirt with elbow length sleeves and rhinestone buttons in the center.

I also spent $2 for a black and white Talbots skirt that I didn't realize was petite and thus fits wrong, and a gorgeous pair of gray dress slacks for $2 that I can't photograph well to save my life, but which are so nice that I figure I could pretend the slacks alone cost up to $10 and it would still be a great bargain.

I found an awesome pair of jeans there too, but I had so many other things in my arms when I set down the pile I must have forgotten to pick them back up. >:( Why couldn't I have forgotten the skirt?

Also, my parents have recently obtained the following cool things: 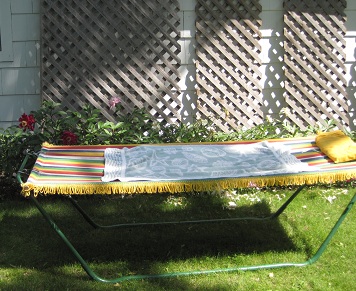 Hammock + stand, ~$10 at an estate sale. It is proving surprisingly comfy despite how rigid it looks.
Now, there is a story behind this one: 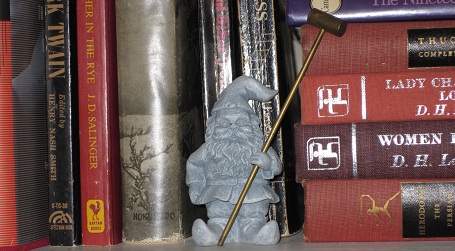 Look at that classy bookshelf full of classiness.
My dad has been wanting a garden gnome for years. Years. He looks for one at every sale. He still does not have one, but when they were out shopping at...er, some garden store for flowers, they saw this little guy marked at a clearance price of $1.99. Apparently he broke off part of a large display set, and is supposed to be holding a shovel in his hands, and without those things he wasn't very valuable. Except to us! So, mom rustled up this little mallet for him to hold, and voila. He is a bookshelf gnome rather than a garden one, so far, but he still looks rather cheery and proud of his new role, yes?