Including my imported Xanga posts, it has taken me roughly 6 years and 3 months to get here. Since my original 1,000th post, it has been 3 years and 4 months. Will LJ still be around for my next 4-digit milestone? This is a legitimate concern now.

He will look awesome in our garden. Speaking of which, I think it is time to take pictures of our garden. Well, the rock garden. Which is one of several mini-gardens and also my favorite because it is flower (and therefore insect) free.

Update: turns out he did not look quite right in that garden as we had no flat rocks, so he went to hang out on the edge of the flower garden. Here is in his new ~natural habitat~ where Mom thought the long leaves gave him a tropical edge.

However, here is the peaceful little rock garden: 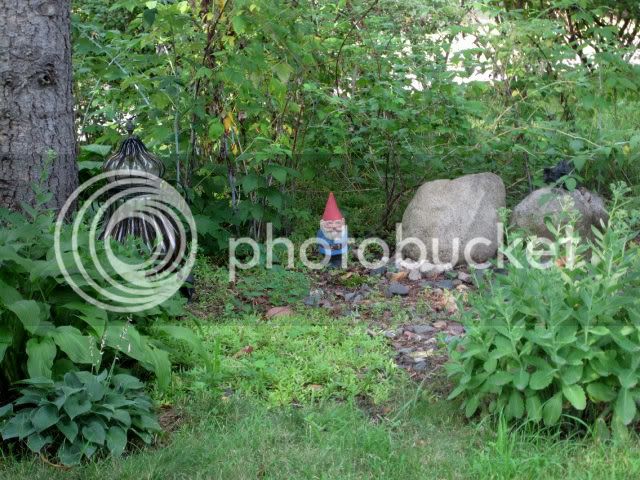 These may not all be visible in this picture, but...

You can click on the pictures below to see larger versions. I was pretty impressed by them so they went on Flickr. Except I then realized I had forgotten to edit them for contrast and whatnot, so the larger ones are usually paler, but...eh.

this last picture will straighten out with time; is sideways right now
-------------------
2. FINALLY. Someone with an appropriate reaction to cutting their hair short for a role instead of "it's awesome to feel so light and free!" Anne Hathaway, I think I might be ready to forgive you for the topless movies. It's been really sad having to disdain you for so long when you're so pretty except not with short hair, which I'm only not traumatized by because it was tragic for Fantine too and started out picking such good roles.

3. After an unbearable fortnight of waiting, the script pieces from Purple Piano Project and Dance With Somebody are out.

PPP, in order of importance:
a) Post hallway hugging:
Kurt: Now we just need to figure out the best way to ease you into the New Directions
Blaine takes Kurt by the hand.
Blaine: I've already figured that out.

OI! I know that, in retrospect, this episode was a glitter bomb of affection for the season, but I still want more.

b) Tumblr comment: "So can I take this as confirmation that Darren actually blanked on Dalton’s name and just went with Warbler outfit? Because I could live with that." -- hah, yes, that interrupted word has always bothered me.

c) I greatly admire the script directions for "It's Not Unusual," which I'm now really sorry I left off my Top 25 Performances list when I was trying to limit my Blaine numbers for some silly reason, because I ADORE that particular brand of shameless goofiness. From Kurt noting he put some planning into it to the dancing Cheerios not being part of said plan, yay! (I haven't seen the episode since last fall so I'm not sure if the dialogue beforehand was there or not, but eh. Also I would like to note that the sunglasses being thrown to Kurt is not in the script)

d) Lima Bean: "You promised you wouldn't pressure me." A beat, Kurt softens.
a) yay, and b) I'm going to need the backstory on that quote ASAP. In fic form.

DWS: almost nothing useful is available yet, but the counseling scene is. So far, I am pleased by the way the minor wording changes in filmed form made it better (i.e. "How's that supposed to make me feel?" over "How am I supposed to feel about that?"), and better yet, now we have script directions! Script directions I am only 80% satisfied Chris Colfer followed. (Sorry, I feel like, based on various interview asides, he carries around this constant low-grade irritation with the relationship any time it gets too...what's the word, sweet. Why can't everyone be like Stana Katic?)

-This hits Kurt hard.
-Blaine's voice cracks, Kurt is shocked and moved.
-Kurt takes his hand, emotional <-- on bright side, at least the handhold was visible. Right below the screen, but clearly happening.
-They embrace, both crying
^ Yeah, no, I don't see the "both" in my video clip.

p.s. thank god they cut out Emma's last line. I can't even imagine how obnoxious that would have been. Good editing decisions are occasionally made!
p.p.s. my script here says "never, ever going to lose me." And while again, I like the more naturally flowing filmed version better because that way we could save the "never" for the finale, I choose to take that secondary emphasis as yet another signature underline on my "It Would Take An Eternity To Break Us" Contract.


4. Also there is an adorable cast interview with Ausiello, which I want to carry around and keep in my pocket because Darren & Lea are sitting together on the end, and naturally, those pretty people cannot keep their hands off each other so my day is made. Oh, and the rest of the time, all six of them are relatively adorable as they talk about hiatus and connecting again. There should be some actual news from the panel soon, but right now I just want to bask in this.  Aside from that, I'm amazed by how little interesting info has come out of Comic Con this year. Like, yesterday, we had some fun times with Community! The end.
[edit: oh wait, Castle was in there somewhere, I think. I forgot about Ausiello's Molly Quinn interview. That was my favorite thing until today. I'm going to hold off on reading any other news, though, so I have something to look forward to.]
Tags: garage sales, glee, milestones, photos
Subscribe