I may have accidentally hooked my mother on 2 Broke Girls. Whoops! Except I'm not sorry at all. Like me, she has been suckered in by the adorable friendship/cute horse and has to admit that it's surprisingly funny when not being gross.


Honestly, I checked out the DVD just to catch up on the 2 or 3 episodes I never saw from season 1, started watching it downstairs when the dog needed company, and then ended up watching the entire first disc straight through. Even saw the pilot and the Goodwill episodes twice after other people started passing by and getting sucked in by its gravity pull.

First of all, this is a superior pilot. It establishes everything you need to know (including a gross joke in the first 10 seconds, but we'll let it slide) and forms an insta-friendship. I watched it twice in the space of about 4 hours and still loved it. I guess I already knew this based on what I said in my review of the pilot (namely how I immediately decided Max was one of my favorite characters on television, which holds true to this day!), but it's a pleasant surprise that it hasn't faded over time.

The second episode is still a highlight in my life just for all the time Caroline spends sleeping in Max's bed. Do you know how long it usually takes to make that happen in my shows, if at all? Way more than two episodes, I'll tell you that. (Drunk Caroline, in particular, is too many kinds of adorable to count)

Everything in Goodwill still cracks me up. Also, one of the things that you pick up on when watching multiple episodes in a row is when clothing choices repeat - I never noticed the awesome continuity with Caroline's new-old shoes and shorts in the subsequent episodes. I also never noticed that Max has her own necklace she wears all the time.

I also notice that Max references rape at least 3 times in the first 3 episodes, and there is just so much sad-sounding history there I don't even know where to START with her issues. The jokes always just kind of flew past me, as they're intended to, but you could really dig into a whole lot of stuff if you thought seriously about her adolescent years.

THE 90S HORSE PARTY. I must have only seen the very end of this one, because the 80s Hipster Pop-Up Party was all brand new information to me.

"The Murphy Bed" should be avoided at all costs, given its apparent determination to break some sort of TV record for "most uses of the V-word per 30 minutes of television."

I still love everything with Johnny, good and bad. Any time Max starts to have Real Feelings my heart grows very full.

I think I only saw a tiny bit of the hoarder episode, too, because HOLY MOTHER OF GOD I DID NOT KNOW TRUE CUTE UNTIL I SAW MAX CUDDLING A TINY KITTEN TO HER FACE.

tl;dr: it is SO much fun to mainline this show even when you've already seen every episode. I am now praying that it will last for a million years so it can get syndicated and take the place of one of the awful comedies on our local station. Ideally Two and a Half Men, which has the same amount or more of vulgarity with 0% as much heart.

-----------
In other news, a bunch of you have said "dash the rules!" and just put up general posts about your favorite Things of 2012. They are way better than the mess(es) below I have created using the standard survey forms, but unfortunately, I am a creature of desperate habit and so I attempted to jam my thoughts into the usual questions instead of just being sensible and talking at length about how, I don't know, Television 2012 was a really great year for platonic friendships and stories of family, which aren't even included in the questions below. Oh well, too late now.


BASIC
Which TV shows did you start watching in 2012?
Gossip Girl, Smash, Revolution, Go On; kind-of-but-not-really The Mindy Project. And The Middle got its first serious foothold.

Everything I'm not reviewing right now is merely in suspended animation and will return eventually.

Which TV shows did you mean to get into but didn't in 2012? Why?
Still perennial favorite answer, Friday Night Lights. (And Merlin.) But also Hart of Dixie & Once Upon a Time because I got very lazy and inefficient about my TV-watching this summer, and Nashville and Malibu Country because I only have time for roughly 2 hours of new TV each fall and like the two listed before them, these guys showed up late.

Which TV shows do you intend on checking out in 2013?
All of the above except Merlin, where I'm officially giving up unless and until I run out of everything else. I might also attempt to dig into old episodes of The Glee Project for more time with new favorite faces.

Which TV show impressed you the most in 2012? Why?
Community is kind of a constant exercise in marvels. (I still do not know how it does this without a genuine OTP.) It's like the workaholic celebrity that has to have 8 different careers at once, the way it never rests on its laurels but is always coming up with something different.

Which TV show impressed you least in 2012?
...honestly, I was pretty happy with the state of TV overall in 2012. Even the ones that went off the deep end in the fall tended to have pretty good spring runs. That said, Gossip Girl's ability to take gold and turn it into absolute mud in half a year's time gives it an edge. Or maybe Go On, for having so much Matthew-Perry-based potential and leaving me mostly unaffected.

Which TV show do you think you might let go of in 2013 unless things significantly improve?
Let's put it this way: "Go On" might not.

Which TV shows do you think you'll never let go of no matter how crappy they get? Why?
Given how I STILL haven't cut ties with Glee even though it's sending me into a state of legitimate depression, I don't think anything's going to do it now. In fact, it's probably going to become an X-Files style Lifetime Fandom, holding strong long past the point of cancellation (ooh, look at that, my stomach just curled up in fear and anguish at the very thought of that word).

awards where I didn't start composing it early enough this year and now I don't know what to say for most of the answers. Everything about 2012 TV was largely good, but somehow it also largely lacked big giant standout moments.

First New Fandom of 2012: Gossip Girl. It is still so weird to say that.

Best New Fandom of 2012: My love for The Middle knew no bounds, but if that doesn't count as new (and/or as a fandom, what with people's level of fannish involvement), then I loved Smash.

Favorite Fandom of 2012: I joined Tumblr for Glee and only Glee, let's put it that way.

Favorite Episode of 2012:  Everything is blurring together in my head, so I'm just going to pull the trigger and call victory for Glee's "Michael" and "Dance With Somebody," because off the top of my head they are the only ones I can remember watching multiple times.

Ten Favorite Female Characters in 2012:
FYI, I'm sad how many of these I have to love in spite of the source material and/or their choices therein.

1. Pam Halpert (The Office)
2. Max Black (2 Broke Girls)
3. Nellie Bertram (The Office)
4. Quinn Fabray (Glee)
5. Marley Rose (Glee)
6. April Kepner (Grey's Anatomy, despite the nine million poor choices made since spring)
7. Kelly Kapoor (The Office)/Mindy Lahiri (The Mindy Project) because BASICALLY THE SAME
8. Frankie Heck (The Middle)
9. Julia Houston (Smash)
10. Ivy Lynn (Smash, and now I'm sad I can only include half my ladylove quartet from this series. I feel like it's time for a new 100 Awesome Ladies list, you?)

Ten Favorite Ships in 2012: Now in semi-random and unlabeled collage form! Fit together like a puzzle piece, so no, there is absolutely no reason Chuck and Sarah get a giant photo except that they were easier to find in vertical-photo form than horizontal and half of these ships were already SO HARD TO FIND PICS OF WITHOUT SPOILING MYSELF. I also feel like I should clarify that this collage is the opposite of that line in Bust A Move, "everything you have is yours and not stolen." These are 90% stolen from the internet.

1. KURT/BLAINE (Glee). They've just destroyed everyone at this point, even as canon destroys them. For instance, they recently took Grissom & Sara's spot in the Top Five Couples Of All Time circle in my brain, and it's possible they are not in fifth place.
2. Jim/Pam (The Office)
3. Chuck/Sarah (Chuck)
4. Castle/Beckett (Castle)
5. Ryder/Marley (Glee)
6. Dan/Blair (Gossip Girl)
7. Mac/Christine (CSI: NY), and oh how I hope it's still good in current canon. DON'T TELL ME.
8. Jake/Addison (Private Practice)
9. Deeks/Kensi (NCIS: LA) - ship on a show on a show I don't even watch, jackpot!
10. Greg/Morgan (CSI), even though canon persists in merely dangling it over my head

Best Musical Performance of 2012:
Glee version: "Smooth Criminal" or the live "Teenage Dream"
Non-Glee version: ...I kind of wanna give it to "Cheers (Drink to That)" on Smash? Yep. That's the song I want to award. extra low quality version, the only kind that exists: here.

Favorite Het Couple of 2012: Jim/Pam. They got their groove back, and I don't even know how. (Castle took a close second)

Favorite Femslash Couple of 2012: It's been a year and I still don't want any girls anywhere to do anything beyond friendship-level cuddling, so I'm taking back last year's answer and replacing it with old standby "none." 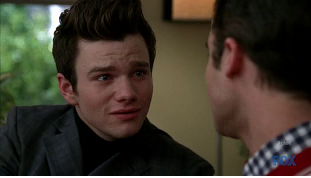 And in complete video form:
hxxp://klaine-edits.tumblr.com/post/21755679879/waltzy-klaine-office-scene

[edit: this is the clear winner so it stands alone, but I kind of want to make a whole separate post for 2012 Shipper Squee now...]

Most Surprising Moment of 2012:  Getting Catherine Tate back full time on The Office.


Biggest Fandom Disappointment of the Year: "Blaine's a cheater." That one's going down in the Big Book Of Legendary Fandom Heartbreaks next to the likes of "Doomsday" and the end of Tonks/Lupin.

Also the Chuck finale, with Sarah forgetting everything and them having to start over.

Also the Gossip Girl finale, for everything.

Or perhaps that time The Box Scene won the script for "Extraordinary Merry Christmas" so we could FINALLY see what the hell was going on in this picture, and then two months and several thousand impressive charity dollars later we got the actual deleted scene. That was a triumphant day.


Favorite LJ Community of the Year: tie between

kurt_blaine for the positive attitude and

ontd_glee for the sheer amount of news

Fandom That You Never Expected To Get Into: Bwahahaha GOSSIP GIRL. Thank god sanity rules the most vocal part of the fandom I've run across, even if it's absent in the writers room. It's like the only show I've met where fandom is more fun than the source material.

Fandom That Made An Unexpected Comeback: I distinctly recall signing termination papers on my relationship with Grey's Anatomy, but then we somehow got back together full time. Granted, we're apart again right now, but not for lack of interest.

Fandom That Inspired The Most Crack: Gossip Girl, I assume, since even the recaps err on the side of cracky.

Last New Fandom of 2012: I'm still trying to really get into The Mindy Project; otherwise The Middle took off in October.