1. How do you like my Poogle's Halloween costume? He's supposed to be a wizard, currently in a trance as he communes with other realms. 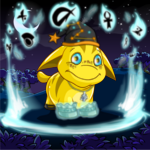 The other pets* are in costumes too (click each one to see their lookup w/ explanation), but he's my fave.
*Don't mind Jezziica's name/gender disparity; that's my pound foster/lab pet.

2. In the last few nights, the How I Met Your Mother reruns have aired three of my all-time favorites: The Mermaid Theory, Swarley, and The Sexless Innkeeper, a/k/a Best Night Ever (Lily made some creme bru-le-le-le-le-le!). I'm so happy and full of HIMYM love right now. I hope I run across a season on DVD at garage sales next year; this show has thus far eluded me in the under-seven-bucks department and my collection is sad without it.

...also, I definitely need to someday - say, after this year is over - update my 2011 list of fave episodes.

3. Here's what I propose for NCIS: LA: someone (on Tumblr,

dotty, whatever) compiles a list -- in text format -- of all the cute Deeks/Kensi scenes for the entire season, and then I go pick it up like a goodie bag in May.  The list itself should resemble spoilers, so not too detailed, and then I can go collect each scene by picking up a library DVD set and easily fast-forwarding to the good bits. Faster and less hassle than trying to get YouTube to put things together without getting taken down/poking at Tumblr on a weekly basis when dry spells are inevitable (although I did like the "my guy" phrasing during the rock-climbing scene and I am pretty sure there was no other context in which to hear that).

4. My feelings on Criminal Minds tonight can be summed up with a quote from Jim Halpert: "Dwight. Nothing with the eyes, please." When I talk about this episode, I'm going to have to use the phrase "I listened" instead of "I watched," it was so bad. And boring, on top of gross.

[spoiler cut because we&apos;re all under one big circus tent cut today]
Candice lost for the first time ever, and I'm pretty sure my emotional investment is now halved. Well, not really, but...it took a blow. Again, I sympathize with Monica and her hurt feelings, but it's Survivor and emotions are intense and everything is understandable. If I were Candice, I'd defend my actions in the moment and sincerely apologize at the reunion show. Now excuse me, I have to go be mad about no more Awesome Doctor/Perfect Human on my screen. >:(

I did greatly enjoy the immunity challenge, though (water slide & ring toss? It's like a child's dream birthday party).

------------
6. Project "Glee Season 5 Reviews" is coming along slowly but surely. It means I've had to all but give up Tumblr to avoid spoilers, but so far I've watched the first episode once (with no scene rewatches except the last one), semi-skipped through episode 2 for the Tina scenes and a few others, have not watched episode 3, and currently am sidetracked by having spent the past 72 hours feeding "Glee Sings The Beatles" into my brain after not hating any of the songs on first listen, but also not loving any of them and being v. disappointed in myself. I am now obsessed with all of them except "Something."

I think my progress may actually be working backwards because a few of these I haven't actually seen in context and so overall I'm more like, "What do you mean there's storyline around this album? No, no stories, no dialogue!  Straight from one song to the next, thanks." Plus I can't stop playing it long enough to play back episodes in order to write about scenes, so...

On the bright side, it's taking all my willpower not to tell you about just my very favorite one or ten right here, which is content that goes in the reviews, so that's some incentive.
Tags: criminal minds, how i met your mother, ncis: la, neopets, survivor, tv commentary
Subscribe