Haaaappy Holiday Weekend To Me

This is the longest vacation I've had from work in months -- nearly a full week! Granted, it's an unpaid vacation, but we were worked so hard last month that it all evens out. I've had the most amazing time. Let me try to recap...

Thanksgiving
In a departure from lifelong tradition, we did not meet with relatives this year, but cooked our own Thanksgiving dinner to have early, on Wednesday night. On the actual holiday, we went on a road trip to the Red Wing area, largely taking the scenic option of Dylan-famous Highway 61 (and may I just say how cool it was to be driving through rural areas, passing a few small towns, and have everything just be deserted. Empty parking lots everywhere, even Target! It was like a tiny temporary apocalypse scenario. Emphasis on temporary).

We went down some gravel roads, admired small cottages on riverfront property, and Dad took some nice photos. We looked around Old Frontenac, and admired some really nice houses in Red Wing itself, including a gorgeous octagon-shaped mini-mansion which is apparently a bed and breakfast that was built in 1857. (The gears in my head are scheming something fierce re: me staying there for a night someday) We also stopped at a state park and admired the view from a high overlook, although it was a bit chilly. I thought it was bearable -- kind of the perfect fall day, actually; overcast, 30 or so degrees, but little to no wind, so just a nice crisp briskness to the air -- but longer than half an hour I think it would have started biting.

Have some scenic views, courtesy of Dad. I'm currently rotating the full-size versions of these into my desktop wallpapers, that's how nice they are. 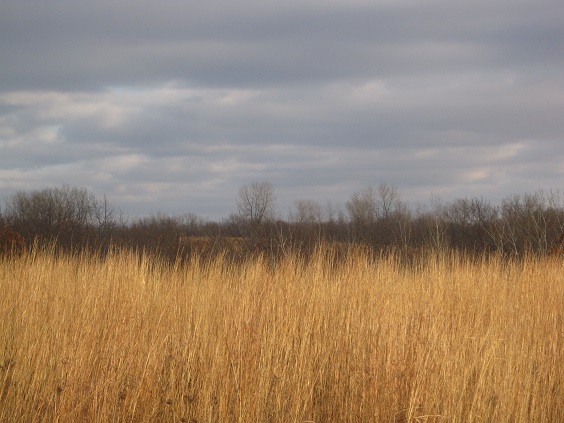 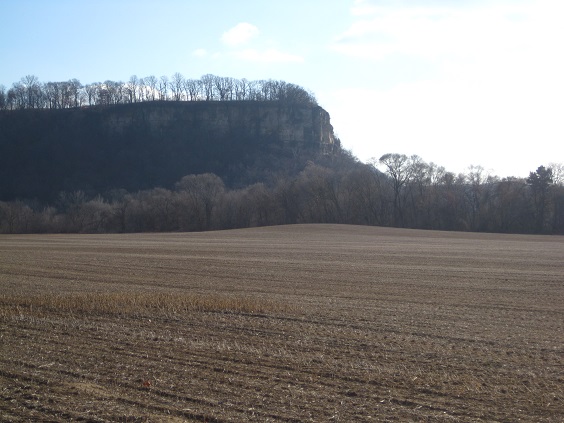 Down a gravel road...albeit a bit overexposed 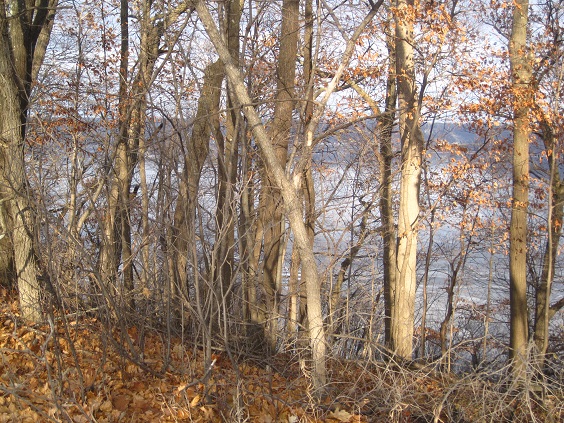 State park again
On the way home, we got coffee at a Caribou spectacularly located in a 100+-year-old former train depot. Not only was the architecture wonderful, it was a 2-story location, and my response upon seeing the upstairs was basically "I WANT TO LIVE HERE." I wish it wasn't so far from home; if I had a place like this within, say, 10 miles, I'm pretty sure I would be here at least once a week, soaking up the atmosphere in one of the comfy corner armchairs with a book, or perched at one of the neat high tables in front of the narrow windows. It's quieter and more pleasant than almost any local library, sadly enough.

We also admired the Le Duc mansion from the outside (currently closed to tours for the season), and then after Dad took a few pictures of it, it was a straight shot home. I read Office Girl during most of the trip, which I will talk about more in the future, but I feel like there's nothing better than reading a good book in the car on Thanksgiving. Last year I read Sarah Dessen's Lock and Key. Pressure's on for 2014! 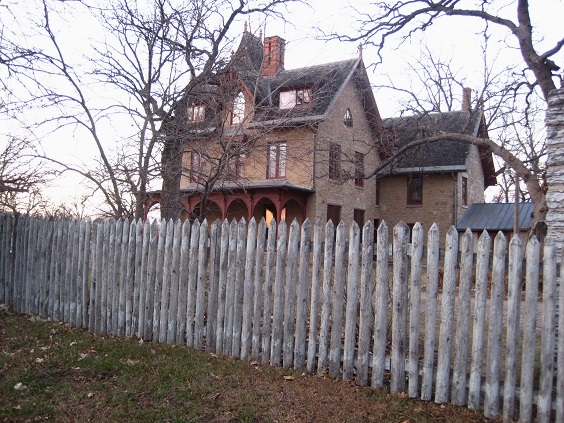 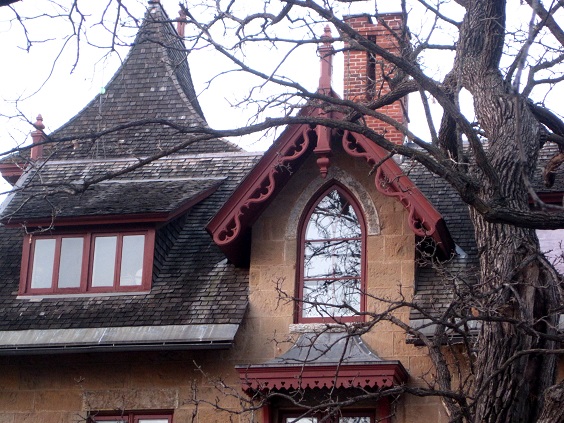 Also a desktop wallpaper. I just love this shot, with the gnarled tree and everything.
Five hour road trip completed, we came home to eat the leftovers of the Thanksgiving meal we'd spent all of the previous afternoon cooking. My parents decided it was worth the $3/pound cost to get a pre-cooked turkey from the grocery store, which then only required 1.5 hours of heating in the oven. For sides we made stovetop cornbread stuffing with wild rice, sweet potatoes, mashed potatoes from scratch (first time I have had those at home), and green bean casserole, and had (store bought) pumpkin and really good apple pie with whipped cream for dessert.

Rest of night was spent finishing my book and on television pursuits, probably.
-----
Black Friday
It is incredibly rare when Chris and I both have a full day off at the same time, but Friday was one of those days. Now, my plan was to avoid retail places, so we went to the nature preserve I visited on Tuesday, but the center itself was unsurprisingly closed, and while it was a couple of days warmer than the day before, it was still kind of chilly, so that lasted less than 45 minutes. We ended up going to a Cheapo's because there was something he wanted to get there. Secondhand record stores are to him what bookstores are to me, so while I don't get quite the same thrill (there are a decidedly limited number of CDs I want at any one time, and there are no vintage treasures known or unknown to discover), they are certainly fun to go to, and I enjoy watching other people find treasure/good deals almost as much as grabbing them myself. And hey, surprise! I managed to find some of the only items under $5 there which ALSO happened to be on my CD wishlist: "Almost Alice" for $4, and "The Music of Smash" for half that..

Finished the night by having dinner at Noodles & Co. Which happened to be right next to the mall. At least now I know for sure that retail places are very, very crowded that day...

One of the things we talked about is the fact that our six month anniversary is either coming up or has recently passed. Neither of us are exactly sure when it...is. As far as I can see, there are 3-4 possibilities within 2 weeks of each other: day where he asked if he could take me on an "official" date, day after that when he came over prior to having the funds for a memorable first date (where daring things like hand holding! happened), Official First Date, and first kiss. Thanks to journaling I know when all of those are, I'm just not sure which one to use.

-----------------
Weekend, Woohoo!
After a slow and lazy start, I spent the latter half of the weekend eagerly making a mini road trip tour of malls (for the pleasure of trying on things with multiple size options in carpeted dressing rooms) and thrift stores. Thanks to the Thanksgiving road trip, I found a Value Village less than 2 miles down the road from Goodwill*, so now I have yet another shop to add to my already extensive list.

*If you're wondering how I was somehow not aware of this, the answers are twofold:
-it's across a freeway exit, kind of dicey driving area with overly busy/crowded streets, and as there was never really a good reason to drive that far, I didn't
-my brother described it best, if crudely: "you can tell we've crossed into the poor area." It certainly takes on a distinctly "city" suburb feeling vs. regular suburb, feels kind of run down, and just not really a place that invites strolling around. That said, this did not seem to affect the quality of merchandise.

I actually found several things I liked, including a fabulously fitted chocolate-brown suede jacket I would have bought if not for the fact that the oversized buttons were impossibly difficult to get through the narrow and unyielding holes, before ultimately winnowing it down to one thing I could not walk away from (well, along with some sparkly pale pink nail polish, new, for a dollar): 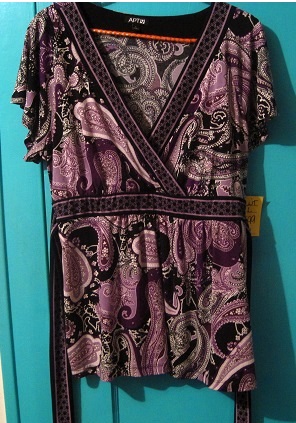 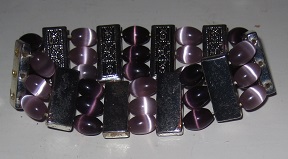 Shirt = $6 and I'm fine with that, because a) Apt. 9, b) THE ENDLESS SHADES OF PURPLE = ACES, c) the polyester spandex blend I love, d) tie sash, and e) the criss-cross section is dotted with tiny sequins that catch the light.

The bracelet ($2) is actually from Goodwill, but as soon as I saw it I went THAT WOULD LOOK PERFECT FOR THE SHIRT I JUST BOUGHT. Due to the usual way my camera changes shirt colors, I promise that the top is actually very close to the colors in the bracelet, and when worn together they look amazing, if I do say so myself. I also like that the bracelet is an elasticized one, rather than a clumsy clasp.

My other major Goodwill scores included... 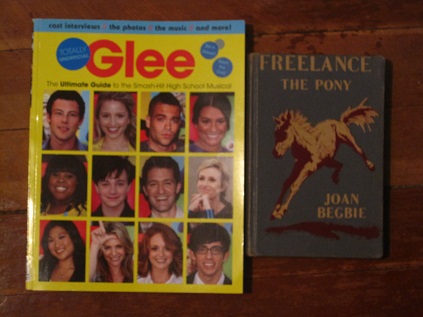 -Totally Unofficial Glee, from back in the first-13-episodes heyday when the books were flying thick and fast with mostly generic and not very well put together information, but I don't care, I still want all of it.
-Freelance the Pony, because a) 1950s pony story and b) ex-library, woohoo! (on second thought, the pony book was from Savers and it cost me an arm and a leg as Savers books do, so let's just say that between the two I spent $7.)

And oh! What is this?? Why, only the cache of Glee CDs I've been hoping to stumble upon secondhand since 2011! 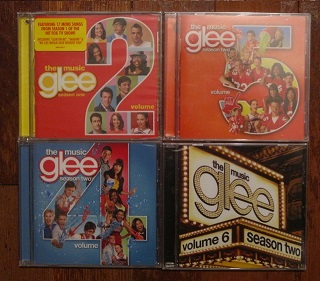 The best part is that I had already scanned the CD section, and I was just dawdling because I didn't want to leave yet, when I wandered by the CDs again and found a brand new stack that had just been put out. The farther down the stack I went, the more Glee titles popped out at me (and my eyes popped in return). There were actually three more I left behind, two that I have and one that is terrible and which I won't even touch (Rocky Horror Glee). $2 each.

Last but not least, I stumbled upon a treasure of a book that I think will make an excellent Christmas present for my dad. He's drawn to things with unique illustrations, and he likes nature books, and that's exactly what we have here. A Walk With Me by Gwen Frostic. I had to pay a ~fancy~ Goodwill price of $5 for the super-slim volume, but I think it's worth it. 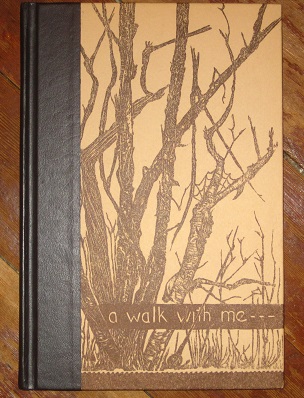 It's from 1958 (as far as I can tell...), in perfect condition, and while I'm not sure if you can see it here -- maybe a little bit, in the green off to the right? -- the pages have this beautiful tissue-thin edging that makes them feel handmade. 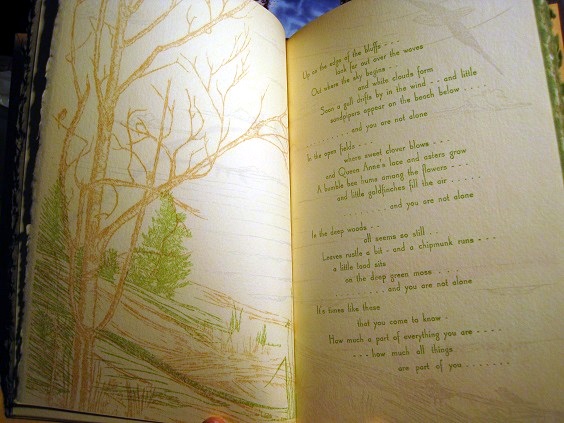 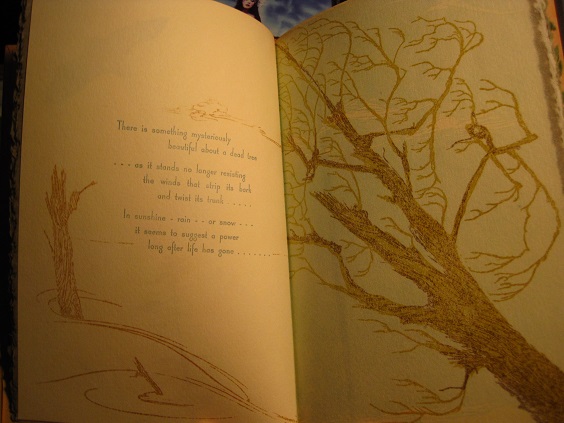 P.S. This is the dress I found at Goodwill last week, the indigo ("prism violet") version. It's still there, or was this morning. I am, at this moment, essentially dying between SHOULD I PAY $7.50 FOR MY DREAM DRESS JUST TO MAKE SURE I GET IT AND HOPE I CAN FIX IT, or, SHOULD I WAIT 2 AGONIZING DAYS (it's been on the floor for over 2 weeks at this point) AND HOPE NOBODY ELSE BUYS IT WHILE IT'S ON SALE, TO GET IT FOR $1.50 IN CASE IT IS PERMANENTLY STAINED? To make matters worse, [I have just learned, since the dress didn't have any care instructions on it] that it's dry-clean only, and I like to avoid that when possible.
------
And...now I guess I have to go back to work tomorrow. Which means I should probably go to bed now and not go back to television, since it is currently 1:24 in the morning and I've been working on this post for something like hours, albeit half distracted by background TV.
Tags: adventures in socialization, glee, photos, thrifty shopping
Subscribe