You know what I miss most? TELEVISION.

I still feel weird and out of sorts about everything and how much I've missed. I have literally posted three times in almost a MONTH. I have squillions of Notepad docs filled with random rambling, but I have no idea how to sort it into posts. I think I just need to wipe it clean, pretend a fire burned through the area, and start fresh.

SO: to begin with, I backdated my one and only TV post of the year, so you probably missed it. Which is too bad! Because there's a lot of stuff in it. Now, spoilers are a risk if you just looked at the post URL, so I have v. helpfully taken a screenshot -- because the cut text is important too -- and provided you with links to each section below, because that's how important I think my words are to you: 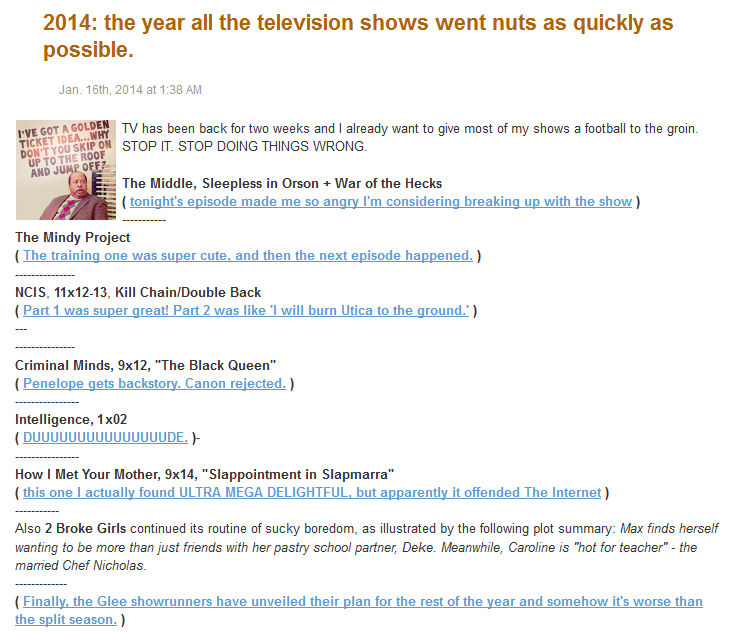 The Middle:
The Mindy Project
NCIS
Criminal Minds
Intelligence
How I Met Your Mother
+Feels on Glee Spoilers-

--------
I have watched a few more episodes of shows beyond that, but for the most part, my existence is pretty Spartan and instead of good TV, I'm watching sitcom reruns. I also have not been reading -- I miss books so much. It's like I've literally forgotten how to read, and I wish I hadn't put a reading challenge on Goodreads because every time I visit the site it just mocks me how far behind I am. I've never been behind before! I've always been many books ahead! I just have no TIME to do anything except WORK, because it takes me days just to scrape up enough consecutive time to escape and go on a walk or meet Chris, both of which take priority, and both of which also exhaust me so that when I'm done, I just collapse.

BUT: one thing I have done is start to marathon season 4 of Community with Chris. Not in time to catch up and watch season 5 live, sadly, but at least I'm kinda less behind than before. I'm also pleased (or is it saddened?) to discover that I can't tell a difference between Harmon-less variety of Community vs. the original, but I'm not sure if that's just a by product of marathon watching, which I've never done before, and I know that marathon viewing always makes shows seem better.

4x01, History 101: It was a nice little welcome back, and I do like Unselfish/Community College Olympics Jeff. Also amused by Abed's Happy Community College Show.  I'm pretty sure these are all feelings I had about both the end of high school and the end of college.

4x02, Paranor Hawthorne's Haunted House of Horrors: THIS EPISODE IS THE BEST EPISODE. Immediately one of my all-time favorites, I have watched it 3 times so far. Super funny and legitimately scary -- I still see no good explanation for the shaking room where Jeff was trapped. Also loved seeing Giancarlo Esposito return. I left off so long ago, I forgot it was only a few episodes in show time between when we last saw him. But for me, it's been 1.5 seasons of Revolution, so it is so disconcerting not to see him as the terrifying Captain Neville.

4x03, Conventions of Space and Time: Well damn. That's the first time I've ever heard "neurotypical" outside the internet. Does that mean it's a accepted thing now? Regardless, I loved Toby and all his creepy, needy ways, and the entire premise of the Con. I also got quite a kick out of Annie being Mrs. Winger, and Jeff resembling the evil creature, and just everything about this. Although I'm officially done with Troy and Britta being a thing, and all we've had to see is them holding hands. This is so incredibly weird and unnecessary. This is like, Joey/Rachel all over agaaaain.

4x04, Alternative History of the German Invasaion: GERMAN NONSENSE! Love it (but my favorite part in the War of the Study Room was the dramatic collapsing of chairs). Especially since they didn't make us feel *too* bad about the group monopolizing the study room all year, and that they got to go back to it in the end. I also love Professor Hard-Ass/Secret Perv Donald Sutherland...and of course, Kevin-who-suffers-from-Changnesia. This is another one I've watched three times. I'm really savoring this season, mostly because DVDs just make repetitive viewing SO EASY in a way that no other format does.

4x05, Cooperative Escapsi Thanksgiving Episode: Would not kick it off my TV in reruns, but I can safely say I did not love this, other than really enjoying Bumper as the overly emotional half brother. Chris aptly said it's because unlike the one with Abed's father, the sentiment didn't feel "earned."

P.S. I would like to register my complaint that the DVD-making people have found a way to force even VLC to play the stupid anti-piracy warning, even if you try to go straight to the menu. At least you can still jump to the end of it -- one of those screens is a full fifteen seconds long. (Have they seriously never seen the irony in the fact that their attempts to warn us about pirating make pirating more appealing?)