It was supposed to end with a yellow umbrella.

sunnytyler001 rustled up this edited ending (or: the 1-scene version) and it's so perfect and pretty that I ain't even mad at all anymore. The finale is just that easy to shrug off. I am also pleased to report that as far as I can tell, it isn't affecting my feelings about the series as a whole. Once in a while there will be be a flicker of discomfort, but it strikes me as the remnants of a bad dream. Or a shadow vibe from The Darkest Timeline. Unfortunately, this means I can't respond to your comments about it -- but man, they were so great. 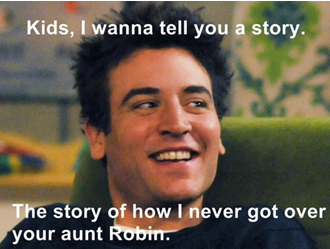 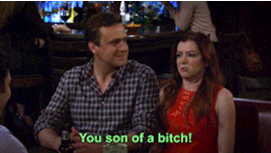 ----
I lied, one more: this was my favorite image being posted on Tumblr after the sweeping madness of last week: 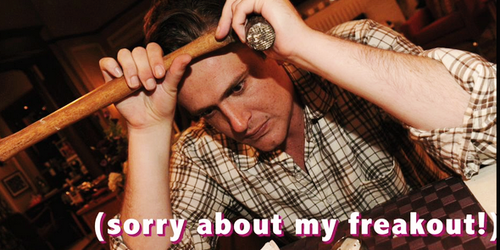 So, I'm not caught up. WHO KNOWS when I'll get caught up. All I know right now is there's been a time jump, we're in New York full time and Mercedes and Artie are now there while Tina is not, and I guess somehow we might have ditched Santana too; DON'T TELL ME, that is brand new information as of yesterday and I want to ponder over that miracle at a later date. Because mostly, what I know is that this episode is called "Bash," and the second I heard that title might have meanings other than "party" -- weeks ago -- I have been ALL OVER THAT LIKE WILDFIRE.

This is what we know: There is a hate crime attack involving Kurt, and the person who's with him dies. Kurt comes out of the attack with at least scraped knuckles and bruises on his neck. Blaine, as far as I know, isn't there when it happens but there are set pics of him leaning his head on Kurt's shoulder as they leave white roses at a memorial. These could go 9000 different ways and I am going to imagine all of them.

[update: and there is “a scene with Kurt and his dad that will make you sob,” which, OH MAN I had not even considered that; BRING IT ON!]

Now that the promo's here, I am watching it (and its alternate version) over and over again for the sound of Blaine's voice/his face at the hospital admissions. Plus: no one told me there was going to be a Kurt/Rachel fight! SO MUCH TRAGEDY PORN. I'm not sure if I am going to watch the episode entirely or if I can get away with just watching the Kurt and/or Blaine scenes -- the latter is my preference, but if they dominate the episode it might be easier to just to watch the whole thing. Except for Sam/Mercedes. They can just shut their traps about whatever hellish season 3 mess of an aborted relationship they're going to drag back into view. Remember how I didn't like Sam in season 3 because he spent all of his time mooning like a moron over Mercedes? THAT WAS NOT A FUN TIME.

Regardless, I'm really looking forward to the sort of emotional devastation this event might wreak across the Glee landscape, and specifically across Kurt's face.

This has been a lot of rambling when really I'm just trying to say KLAINE + HURT/COMFORT + CRIME DRAMA FAIRY = THE GREATEST IDEA IN THE HISTORY OF GLEE'S IDEAS and 24 hours from now I hope to be yelling in more specific excitement.

Tags: glee, how i met your mother, speculation, spoilers
Subscribe