Thrift ALL the things!!

I have had some pretty epic luck lately in my thrifty shopping, which almost makes up for not getting to go to very many garage sales. 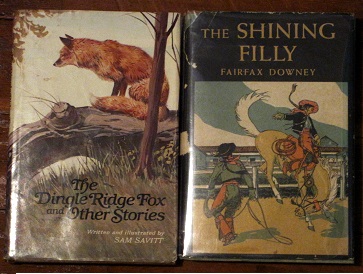 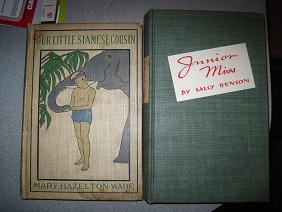 All of the above were $2 or less. The first one was found in an antique store, and the rest came from my local Half Price Books.

1. The Dingle Ridge Fox and Other Stories - Sam Savitt, a beloved author/illustrator of mine. A slim little children's volume from the 70s,

2. The Shining Filly - Fairfax Downey. 1950s copyright, set in "California when it was still part of Mexico," a lovely old horse book.

3. Our Little Siamese Cousin - part of an early 20th century geography series about "stories from other lands," this one 1909. I picked it up partly because I love global stuff written by white people long ago, always curious about insensitive language or inaccuracies, partly because I liked the tissue paper protection over the plates, and mostly because Bookfinder.com told me copies are currently $15 and up.

4. Junior Miss - an extremely sweet children's story from 1939 (this edition 1941). I started skimming the first few pages and fell in love. My mom was similarly hooked, and read it the night I brought it home, in love with its clothing details and generally innocent tone. It cost me 85 cents including tax, so how could I not?
----------------- 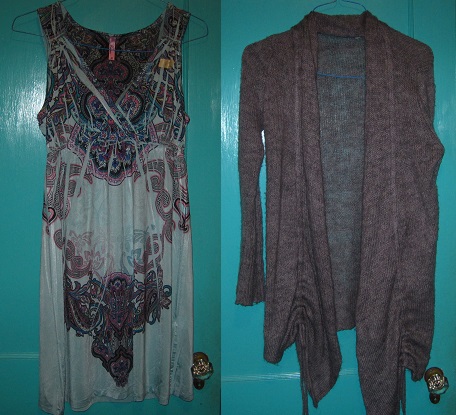 These two are ACTUALLY from a garage sale, so they cost $2 and $1, respectively. The dress has a beautiful silky-rayon feel, brand is Kiera and I think I can pull it off with the right tank underneath. (Oh, shoot, I forgot to look for one today...oh well.) The cardigan is very soft and a medium from Charlotte Russe, so I'm surprised it fits -- it's a little tight sliding over my upper arms, but once on it's super comfy, and also WARM.

And then I went to Savers! 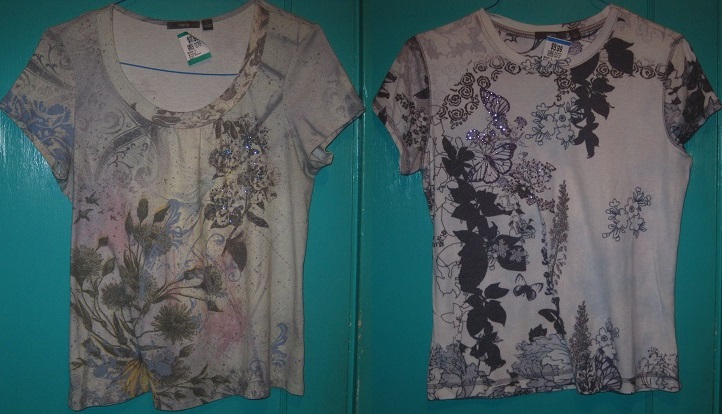 $4 and $3 each, Apt.9. Even though I already have a couple of similar shirts with this pale-design, blue-green color scheme and sequins, I couldn't resist just one more for the cool pattern of wildflowers. And I love the white one, which also has hints of blue in the design despite purple sequins. 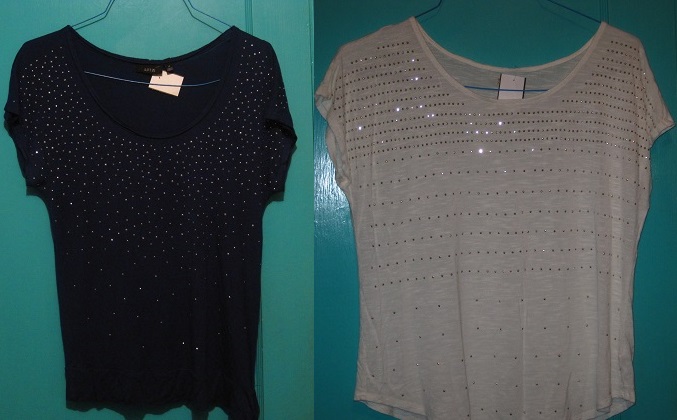 $5 and $4 each, also Apt.9. These are amazing because I saw ones very similar to these at Maurices last Christmas, when we went in to exchange one of my presents, and I ultimately decided against the exchange but was really thinking about getting one. I like this price better! They're studded with sequins for sparkle -- silver on blue, gold on white. Also, I forgot to photograph it but the blue one has a cute decorative tie-sash that that hands down one thigh. And despite the white one looking all shapeless, because it's a large where the other is a medium, I really bought it to wear *under* things, so I'm pleased with it. 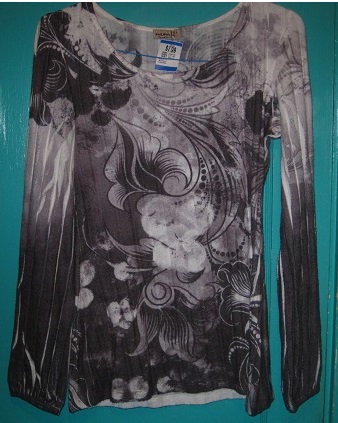 $4 and this is actually a form-fitting sweater. I LOVE IT. My favorite brand and, other than being a little bulky and loose around the lower arms (which must be how it's designed), it's perfect. My second favorite of the day (the blue top is my fave). 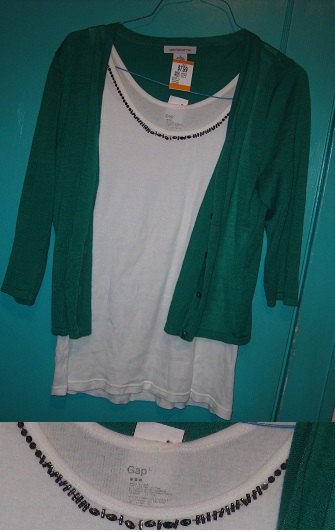 They had a whole section rack JUST of cardigans, separate from the sweater rack, and I nearly went into paroxyms of glee -- so much so that I couldn't make a choice. I ultimately put several of them back and randomly grabbed this green one because I liked the fit. That was $4; the ribbed white tank was $1.50. I bought it mostly for layering purposes because of the cool shell-bead design on the neckline.
-------------
And last but far from least, pop is on sale at Walmart, specifically 12-packs of cans and specifically Vanilla Coke (Zero) (which is like NEVER on sale) for $3. That's already a good price for cans -- they sometimes go down to $2.50 but only if you buy 4 at a time -- and for vanilla flavoring, well, I am just in heaven. They also have a bunch of tanks on clearance at $3 apiece, which i about on par with Savers and Goodwill's regular prices, and although I normally avoid their clothes, layering tanks don't have to be great quality -- you just need a bunch of them. Cheap is the way to go.

Meanwhile, my holiday weekend may only be as long as a normal person's weekend, but so far here's what I have done with it:
-spent 8pm-11am with boyfriend, and only spent like 9.5 of those hours sleeping. (I HAS A CHRONIC SLEEP LOSS)
-Spent 3 hours at Savers
-Made quick stops at Half Price Books, the dollar store and the library
-Read a book
-Watched 2 episodes of TV that I should talk about soon

I have another huge, epic day of shopping and exciting things planned for tomorrow, so I should probably get to bed, but I'm afraid I'm so excited by thinking about it that I can't seem to make myself turn off the computer.
Tags: photos, thrifty shopping
Subscribe