Don't doubt your heart, and keep us apart

Double episode review now because initially I felt very "blah" about episode 6 (that's a new post for LJ I just imported from Tumblr a second ago), but then Tumblr was full of excellent discussion and thoughts that I also blabbered all over, particularly this 3500 word Mitch/Jamie meta that is so good I'm pretty sure maegfen and I should be fandom spouses. I linked to my posts because at least 50% of this week's review is in response to those and my extreme failure to focus on how great the ship focus secretly was last week, even if it wasn't sunshine and puppies.

Then I wrote more words on the rest of the episode.

Now, LET’S TALK ABOUT THE PEOPLE INVOLVED IN MY SHIP. 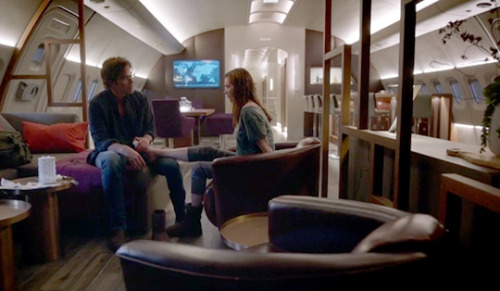 -----------------
2x07, "Jamie's Got A Gun"
This title is accurate insofar as Jamie (along with other people) holds a tranq gun to fend off rogue panthers/bears/foxes while out in the field and does absolutely nothing with it. Have you just been regretting the fact that it was too spoilery for 1.06 and been dying for an excuse to use it ever since? As for my main impressions:


The Good
1. YES LOGAN'S THE MOLE! (and not the cute kind that Mitch resembles) I don't even mind looking like a fool for defending him because I have never been so happy 2 be wrong.

And with that, I let out the breath I'd been holding for the past week. Ship threat targeted for neutralization. Please let this be exactly what it looks like and not some kind of weird "okay I did it but ONLY BECAUSE THEY THREATENED ME." I find it much more believable and comforting that Jamie just has the world's worst taste in men.

2. It was nice to see Abe and Jamie work together. I find his faith as comforting as his presence, and I am glad the show at least somewhat listened to me and had them make a connection.

The Shipping News a.k.a. The Very Good
3. Mitch's defense of Jamie. <3 They owe his presence to her and he's not going to let them forget it because it's inconvenient. I especially like that his exact words are he never agreed she was a liability, "I agreed that she's hurting." (such good phrasing) And "that means she gets all the time she needs, and I'm done talking about it." *dreamy sigh*

4. Nice that he does not rise to Allison's weirdly hostile bait about his crush. Sorry you think he's too good for her/made for better things? Like you apparently? ugh gross)

5. How Mitch uses the exact phrase "last time we were drinking vodka on a plane" just in case his last attempt to bring it up was too subtle. I refuse to be demoralized by her more aggressive shut down, both because LOGAN'S A DIRTY ROTTEN MOLE HAH!, and also because the very sharpness with which she avoids the topic lends itself to hope. That memory is locked in a box, surrounded by sharks, with guns, and she will open it when she's good and ready but for now she's simply going to put it off until her life feels like her own again.

6. Aw @ him wistfully watching her leave.

IDK What Feeling This Is
7. As much as I love my two faves doing anything together, Mitch forcing Jackson through the repressed memories and not even having the decency to display some empathy afterward made me all kinds of :( Come on guys, be bros. Bros without yo hos.

(I want to believe that Mitch looked at least a little guilty about forcing him for the greater good, but I just didnt see enough conflict to satisfy me. Revolution was full of emotional-conflict-over-ethics faces.)

8. So Abe's gonna hide a secret from Jackson now, huh? My how the turn tables have...turned.

9. Wait, is Dariela really gone, just like that? What?? That does not jive with the last-day-of-filming cast photos. Will she pop back up for the finale?

(But for the moment, I'm pretty happy with her getting gone after her last act of treason, a.k.a. convincing Logan to stay with Jamie. You don't aid the ship threat. If you can see Logan's dumbass heart eyes, which frankly I can't, it's pretty impossible to have missed Mitch's.)

The Bad
10. Good god those CGI panthers were bad. So bad. Everyone who signed off on them should be ashamed.

11. I cannot believe there is no one here to hug poor wibbly broken Jackson right now.

12. Allison is on extremely thin ice with me right now. I don't like to hate people on this show who aren't openly villains, but between her hostility toward two of my faves and puppeteering of my other one, I will make an exception.

13. Also, WHY IS ALLISON MAKING SUGGESTIVE COMMENTS TO MITCH. THIS IS DISGUSTING. I'm...I'm gagging and vomiting at the same time. I'm
gavomiting.
(listen y'all, I have a Scrubs reaction for EVERYTHING. what I do not have, unfortunately, are gifs of those things)

Up Next
Oh hey, does that look like Abe & Mitch are captured along with Jackson? Because I'm down for that. Also, the episode summary says “Jackson’s mom goes missing in Africa” and OMG, I hope that leads to a very happy rescue at some point because in the complete opposite of how I feel about Jackson’s dad, I love his mom so much. Please be alive, and hug your son.
Tags: lyrical post titles, tv commentary, zoo
Subscribe